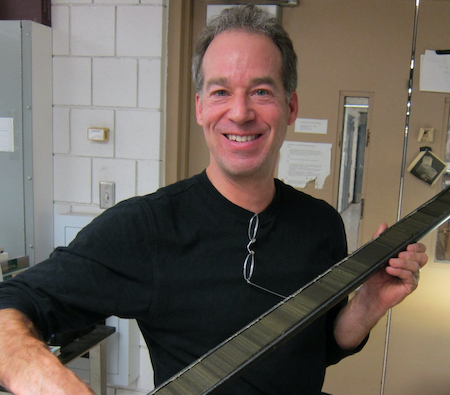 POCATELLO – Increased carbon dioxide in the atmosphere is causing a “greening” in northern latitudes and more carbon dioxide is being absorbed by plants there, according to a new study co-authored by Idaho State University researcher Bruce Finney, that includes the Northern Great Plains of the United States.

“Greening” in this sense means higher plant productivity on the large swaths of grasslands studied, including the plains of Montana. Increased amounts of carbon in the

atmosphere due to the burning of fossil fuels allowed higher plant photosynthesis while using water more efficiently. This is because the stomata of the plants, a pore on them that opens up to absorb carbon, can be open for a shorter period of time to absorb needed carbon and lose less water to the atmosphere. The greening was dependent on climate change, and was more pronounced in the warmest and driest areas.

“Carbon Dioxide, plus water equals plant material and oxygen. That is the equation of photosynthesis,” said Finney, who is a professor of biological sciences and geosciences at ISU who worked with researchers at Montana State University and the University of Wisconsin. “So with more carbon dioxide in the atmosphere the plant is able to get the carbon it needs without leaving its stomata open quite as much to reduce water loss. Water-use efficiency has gone up as carbon dioxide levels have gone up.”

“There would be more carbon in the atmosphere and the climate would be even warmer than it is now if plants weren’t absorbing some of the extra carbon,” Finney said. “This has essentially made the climate-change problem less severe because the plants and the ocean have helped us, so to speak, absorb extra carbon.”

Although vegetation greenness has increased across much of the global land surface over recent decades and that trend is projected to continue, particularly in northern latitudes,  plants are also showing less nitrogen, a crucial element for them. The areas studied were natural grasslands and not irrigated.

“We looked at nitrogen in leaves and found it was going down relative to carbon,” Finney said. “There is still enough nitrogen for plants to grow, but the physiology of the plants  has changed so they produce more tissues that are lower in nitrogen.”

This means plants would be less nutritious to animals that eat them because nitrogen is important in building proteins, muscle and other important things.

Also, because nitrogen is not increasing at the same rate as carbon in plants, scientists don’t know how long the greening trend will continue.

“Plants might eventually run out of nitrogen to continue the increasing greening trend,” Finney said. “Future greening may be constrained by nutrient availability needed by plants.”

To complete the study, Finney and co-authors Jack Brookshire and Bryce Currey from Montana State University and Paul Stoy from MSU and the UW, looked at satellite imagery data to measure light reflected by plants across the Northern Great Plains natural grasslands from 2000 to 2018. Some of the satellites taking measurements were equipped with NDVI (normalized difference vegetation index) sensors, which can measure the chlorophyll pigment. Though there was variability, the net trend was that the region was getting greener. The title of their study is “The Greening of the Northern Great Plains and its biogeochemical precursors” published in March in the journal Global Change Biology, a prominent journal in biological processes and environmental change research.

For the second part of their study, the researchers looked at plant samples of sagebrush and three species of grass from the region that were part of the Montana State University Herbarium collections. Some of the samples date back to 1881. The researchers measured the carbon and nitrogen percentage and the carbon and nitrogen isotope values of the samples.

“The greening and the trends in the chemistry of the plants was most strongly related to the changes in carbon dioxide concentration in the atmosphere,” Finney said. “We could see that the water-use efficiency of the plant had gone up as the carbon dioxide level went up.”

Finney said he is starting a similar study that will focus on lands in Idaho. That study is part of the National Science Foundation’s five-year, $20 million, statewide  Idaho EPSCoR GEM3 (Genes by Environment, Modeling, Mechanisms Mapping) study taking place. He will be working with another ISU Biological Sciences faculty member, Kathryn Turner. They will be working with plant samples for the Idaho Museum of Natural History Herbarium. Finney will be doing carbon and nitrogen analysis of