POCATELLO – As the year 2020 begins, the College of Pharmacy at Idaho State University proudly celebrates 100 years of preparing pharmacists. A look through the decades shows how the College proved, time after time, to be well ahead of other pharmacy schools in the nation in terms of curriculum, accreditation and advocacy.

Our story begins in 1918, when Norman Adkinson, president of Idaho Technical Institute, now known as Idaho State University, decided to begin the first pharmacy school in Idaho. Many pharmacists in the state had been pushing for a school. In 1918 World War I had just ended and Pocatello was a lively railroad town, so they thought “what better time and place?” It was May 1918 when Eugene O Leonard began to outline and plan the pharmacy program. Few knew that Leonard would then serve as the dean of the college for 30 years.

On April 17, 1920, it was announced that pharmacy would be offered beginning in September at the Idaho Technical Institute. in 1920, there was no formal or nationally accepted accreditation, but ITI’s program was being recognized throughout the nation, appearing on approved program lists published by state boards of pharmacy. In 1920, the first three students were enrolled in the two-year pharmacy graduate program. In 1922, the three-year pharmacy graduate program was implemented as well as the pharmaceutical chemist program.

Over the following few years, changes and improvements to the degree were made until 1930, when a bill was passed requiring all candidates for the license to obtain the four-year Bachelor of Science degree.

In the 1930s, the Great Depression affected Idaho and the Idaho Technical Institute no differently than the rest of the nation. Though the College struggled for funds, pharmacy program enrollment was growing. During this time, all faculty were registered pharmacists, and students would pay a total of $30 per semester for tuition and $28 per month for room and board. Enrollment had been increasing steadily, jumping from 36 to 133 students enrolled in a matter of a decade. 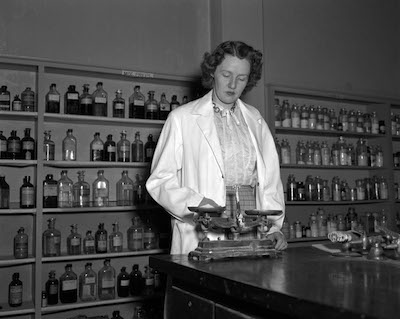 The pharmacy program was housed in a number of establishments on campus. In 1940, the need for more space couldn’t be ignored any longer. The College of Pharmacy was granted $175,000 by the state to build what we know as Leonard Hall today, the namesake of Dean Leonard. The building was completed in 1942 and enrollment increased to 185 students. Ahead of national standards, the College implemented a new five-year Bachelor of Science degree in pharmacy in 1957, which wasn’t established to be mandatory throughout the nation until 1960. That same year, the college was accredited and received an “A” rating, working continuously to be a leading example among other schools and succeed in being ahead of the times.

In 1976, enrollment reached its highest ever at 337 students, likely due to the Federal Health Professions Scholarship program. The 1970s also saw the initiation of clinical pharmacy courses, pharmacy administration and continuing education positions were also funded and filled.

The College of Pharmacy saw two significant improvements in the 1980s. The college was reestablished into two separate academic departments, the Department of Pharmacy Practice and Administrative Sciences and the Department of Biomedical and Pharmaceutical Sciences. The Doctor of Pharmacy degree as a single entry-level degree was introduced as well as a Ph.D. in pharmaceutical sciences. The other notable improvement was the decision to remodel Leonard Hall.

In the 1990s, Dean Barbara G. Wells worked to strengthen multiple aspects of the College during her deanship, including teaching, research and service programs, growing scholarship endowments and upgrading the building itself. The building received an 10,000 square-feet addition during this time, that was used for a new classroom, a small-group teaching room, a research lab, more faculty office, and a basement. 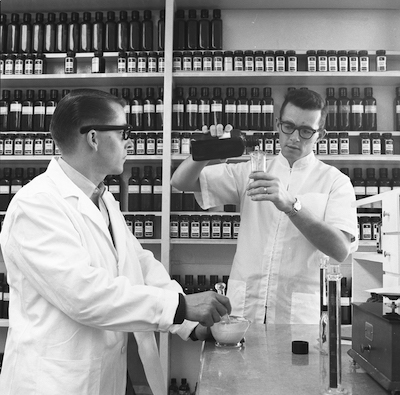 The beginning of a new century looked promising for the ever-growing and changing College of Pharmacy. The curriculum and learning strategies were again revised to keep up with modern requirements and technology. In 2009, the College saw the addition of the ISU-Meridian site, made possible by a $5 million gift from the ALSAM Foundation. The only pharmacy program offered in Idaho was now being offered in Meridian and Pocatello by ISU.

The ISU College of Pharmacy hopes to continue to prepare bright, successful pharmacists and is optimistic about the goals they will accomplish in the next 100 years

“We are extremely proud to be celebrating 100 years of excellence in pharmacy education. We celebrate all of those individuals who, over that 100-year period, made this a great college of pharmacy,” said Walter Fitzgerald, dean for the College of Pharmacy. “Sometimes, with a long history, you can become inflexible. Even though we have a 100-year history, we are able to quickly adapt to change in our profession and change in health care.”

Currently, the College is accredited by the Accreditation Council for Pharmacy Education. The College of Pharmacy works hand-in-hand with the Idaho legislature, supporting and advocating for progression in pharmacy practice laws. Because of the diligence of ISU faculty and administration, Idaho has adopted some of the most progressive pharmacy practice laws in the country, allowing pharmacists in Idaho to treat patients for a number of conditions, providing patients with more accessible care.

As the College celebrates its 100th year, it will also congratulate the first graduating class from the UAA-ISU program in May. While enrollment numbers have fluctuated over the years, ISU has prepared approximately 4,500 pharmacists and pharmaceutical scientists throughout its 100 years.

The College of Pharmacy will commemorate its 100-year history with a Centennial Celebration on Sept. 11-12, 2020 in Pocatello.