Idaho State University to celebrate the return of the Red Hill “I” on Oct. 10

POCATELLO – After more than five years of absence from Idaho State University, the Red Hill “I” icon has returned to campus. The Bengal community will celebrate its return at 4 p.m. on Oct. 10 on the Hutchinson Quadrangle.

The public is invited to join in the celebration, which will feature brief remarks and refreshments.

"The ‘I' on Red Hill is an important part of the legacy of Idaho State University,” said President Kevin Satterlee. “This monument symbolizes the traditions that have shaped our great institution, and it will forever be a hallmark that alumni can return to and celebrate our history.”

The new “I” is 71 feet long and 24 feet wide. It was designed by a team of ISU civil and environmental engineering students who were assisted by faculty in the same department. ISU Facilities Services provided project management and oversight. A&E Engineering was the engineer of record and advised the team of ISU students on the design. Starr Corporation was the contractor who built the “I.” The ISU College of Technology’s Civil Engineering Technology program did much of the surveying for the project. 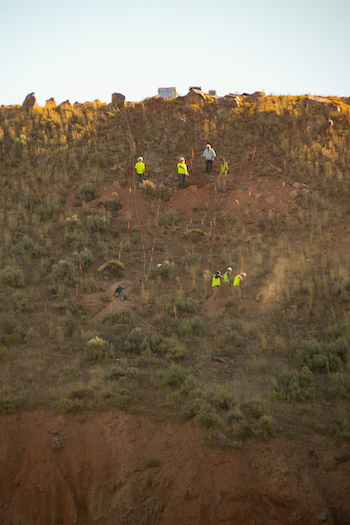 “The reconstruction of the ‘I’ has been a collaborative project with many different groups working to bring this icon back to the campus and the community,” said Bruce Savage, chair of the ISU Department of Civil and Environmental Engineering. “From the generous alumni donation to the students, faculty, Facilities Services, engineering alumni (A&E engineering) and the contractor, it has been a team effort. We have honored the history of the original ‘I’ that was built and maintained by ISU students by having civil engineering students take the lead on the design. What a great opportunity for them. It has been an honor to be part of this project.”

The construction of the “I” has been funded by the Rice Family Foundation, in honor of Dr. Lawrence H. Rice, who for 34 years worked at ISU as an English professor who eventually became academic vice president. Several generations of the Rice family are ISU alumni. The cost of replacing the “I” was approximately $225,000.

“The 'I' reminds me of the remarkable story, success, and growth of Idaho State University and our graduates,” said Ryan Sargent, director of Alumni Relations. “Everyone remembers gazing at it, hiking to it, or lighting it when we were students. The effort to restore the ‘I’ to Red Hill took ingenuity and teamwork, and stands as a testament to the commitment Bengal alumni and students have to Idaho State and each other. The 'I' helps us remember the past as we look forward and plan for the future.” 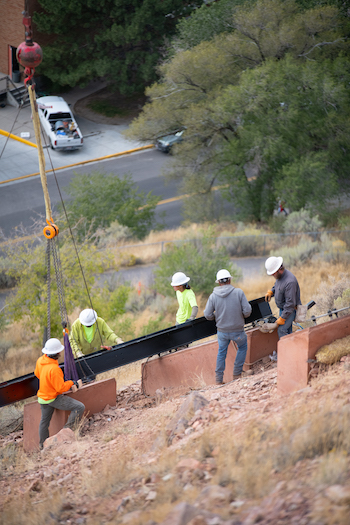 The “I” was built on a 34-degree slope. First, test holes were dug to understand Red Hill’s soil makeup and then its foundations were hand dug. A mud slab – which is a layer of concrete footing – was poured on top of the rock to give a working surface for the construction of the “I.” Holes were then drilled down through the concrete into the native rock and steel bars were placed in the holes and grouted in place to serve as rock anchors. Then concrete beams and piers were poured on top of the footing to encase the steel bars. A steel substructure, fabricated by Spartan Steel, was swung into place on top of the concrete beams and piers. The final stage was building a steel superstructure that will hold composite grating the makes up the visible “I.”

Krystal Chanda, principal and professional engineer with A&E Engineering, Inc., has been involved with the “I” project for several years. Her first involvement was with a sub-committee of the Alumni Board with the mission to return the “I” to Red Hill. A&E completed the preliminary engineering of the “I” along with Strata, who completed the preliminary geotechnical investigation.

The engineering students used Chanda’s original concept and preliminary engineering design to create the final design of the “I.” They completed all the engineering calculations, performed material testing, and drafted the first set of construction drawings. A&E reviewed all the calculations and finalized the drawings.

“A&E is so happy that we were able to be a part of restoring the ‘I’” Chanda said. “Many engineering alumni don’t have the opportunity to work with students and professors in this capacity and it is something that I will never forget. Starr did an amazing job constructing the ‘I’ on very difficult terrain. Seeing it back on Red Hill is very exciting.”

This new “I” replaces the old cement “I” that was taken off the hill in 2015 due to safety concerns. Thenew symbol on Red Hill has been built to last. 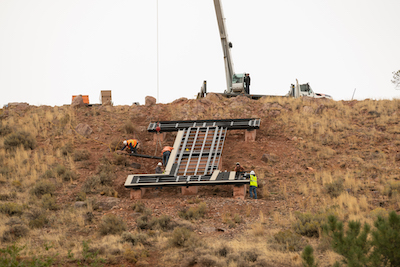 “The new ‘I’ is going to be around a long time,” Savage said. “It’s going to be tied down to the bedrock of the hill. In 100 years it’s not going anywhere.”

The team of civil and engineering students who designed the hill was comprised of master’s students Jared Cantrell, Karma Gurung and Ruchin Khadka and undergraduates Katie Hogarth, Mahesh Acharya and Samantha Kerr. ISU civil and environmental engineering faculty who volunteered their time to peer review and advised on the project included Savage, who served in a team-leader role; Assistant Professor Mustafa Mashal, who served as the advising structural engineer; and Senior Lecturer Jim Mahar, who provided geotechnical expertise.

The ISU Facilities Services project manager was Herb Lee and its director of design and construction was Jason Adams.

• The new “I” is 71 feet long and 24 feet wide. It is orange with a black border, with a white border around the black, retaining its original look.

• Starr Corporation is the contractor building the “I.”

• A&E Engineering developed the original concept and preliminary design; and is the Engineer of Record. 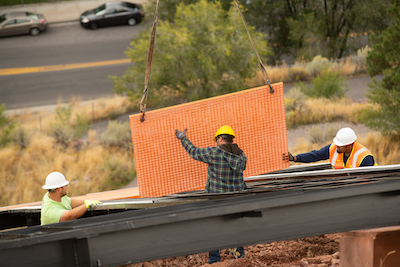 • A mud slab – which is a layer of concrete footing –  was poured on top of the rock to give a working surface for the construction of the “I”.

• Holes were drilled down through the concrete down into the native rock.

• Steel bars were placed in the holes and grouted in-place.

• A steel substructure was built on top of the concrete beams and piers.

• The final stage was building a steel superstructure that will hold composite grating that makes up the visible “I”.

• In 1916, the original symbol, a letter “T,” was added to Red Hill in recognition of the institution’s evolution from the Academy of Idaho to the Idaho Technical Institute.

• The icon was removed in June 2014 due to safety concerns related to ongoing erosion.