POCATELLO — Jared Cantrell,  a senior  Idaho State University Department of Civil and Environmental Engineering employee has received the ISU 2017-2018 Student Employee of the Year Scholarship and a $2,000 scholarship from the ISU Career Center and Scholarship Office. 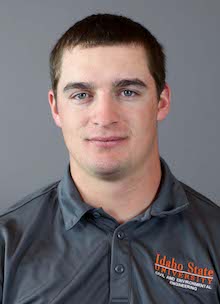 Students were nominated by departments based on the impact the nominee has had on the campus and community, leadership skills, outstanding quality of work, and extraordinary initiative.

Student employees are vital to the mission of Idaho State University and ISU recognizes excellence in its student employees each year through National Student Employment Week, held in mid-April.

Cantrell, who will begin graduate studies at ISU this fall, has been working with the Department of Civil and Environmental Engineering since November 2016. During his time, he has gone above and beyond his regular duties in an effort to improve the department both internally and externally, according to Mustafa Mashal, ISU assistant professor of engineering, who nominated Cantrell.

Cantrell assumed leadership roles in a variety of projects within the department, the most notable of which included his role as project manager for the construction of the new Structural Laboratory (SLAB) at ISU. Cantrell’s responsibilities included managing contractor relationships, operating heavy machinery, budgeting, adhering to safety protocol and meeting a tight deadline, which he handled by completing 80 percent of the work in four weeks. He has also helped other departments in the Physical Sciences Building, including the mechanical engineering and chemistry.

Cantrell has led efforts to refurbish six labs for his department, which includes the following:

The Structural Dynamics Laboratory in the Engineering Research Complex

Concrete and Asphalt Laboratory in the Lilibridge Engineering Building

In the classroom, Cantrell is an outstanding student, receiving multiple high marks in his classes and actively participating in classroom discussion. Outside the classroom, Cantrell balances career-related and extracurricular activities while maintaining a driven work ethic and a friendly demeanor, Mashal said. Cantrell has been described as an out-of-the-box thinker and problem-solver with a clear vision for his future.

“Thanks to Cantrell’s contribution, his department and the University will benefit for years to come,” Mashal said.