POCATELLO – Marvin K. Schulte is the new chair of the Department of Biomedical and Pharmaceutical Sciences in Idaho State University’s College of Pharmacy. 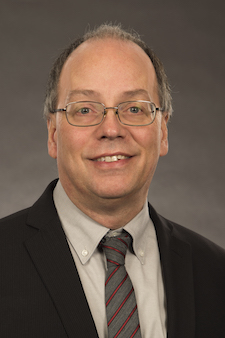 Before joining ISU in January, Schulte was a tenured professor and chair of the Department of Pharmaceutical Sciences at University of the Sciences, Philadelphia College of Pharmacy, a position he held for five years.

Schulte brings more than two decades of administrative, leadership and teaching experience to ISU with a proven track record in research, curriculum development and enhancing student enrollment. At University of the Sciences, he led research development in the Philadelphia College of Pharmacy.

“I am excited to join the university community and I look forward to contributing to the already outstanding research and teaching environment at ISU,” Schulte said. “I was attracted to this position because of the College of Pharmacy’s excellent reputation and strong focus on biomedical research development.”

Schulte holds doctoral and master’s degrees in biochemistry from the University of Minnesota, Minneapolis and completed a three-year postdoctoral fellowship at the Medical College of Pennsylvania in Philadelphia in 1996. From 1984 to 1987, he served as a physics and computer science teacher with the U.S. Peace Corps in Belize where he received grants from U.S. Aid for International Development to develop computer science facilities and curricula. In 2013, he was appointed the McNeil Endowed Professor of Pharmacology at the Philadelphia College of Pharmacy.

An accomplished researcher, Schulte has published more than 30 articles and abstracts on a variety of topics dealing with neuroscience and biochemistry, including treatments for Alzheimer’s disease, obsessive-compulsive disorder and rabies. His research has been supported by grants from the National Science Foundation, National Institutes of Health and the American Heart Association.

A member of the American Pharmacists Association and Society for Neuroscience, Schulte received the Sven Ebbesson Award for Excellence in Neuroscience and an Outstanding Teaching Award two years in a row from University of Alaska, as well as Dean’s awards for outstanding service from the Philadelphia College of Pharmacy.

“I am very pleased that Dr. Schulte chose to join our team. Not only is he a gifted researcher, he has a history of serving as a mentor and assisting others in building and expanding their research and teaching careers. That is true leadership,” said Paul Cady, College of Pharmacy dean.