POCATELLO – In 2011, Christina Potts decided she did not want to work at a call center for the rest of her life. Although she wanted to begin attending college, she had a significant life change approaching and questioned whether it was the right time to begin. 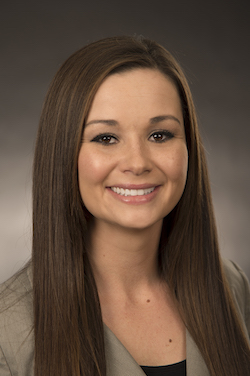 However, after a friend gave her a campus tour and told her how to get started, Potts realized she was ready to begin her college career. She began attending ISU in spring 2012.

Once Potts began taking classes at ISU, she decided to major in health care administration.

“I have always enjoyed being a leader, and I wanted to be part of the health care field,” Potts said. “I spent time researching the degrees available at ISU and narrowed it down to a few. Based on that, I looked further into the courses I would be taking, the demand in the field, and the mean income.”

Over the next three years, Potts got married, quit her job, and gave birth to her second child. She also dealt with a number of personal issues during this time, including postpartum depression.

In the spring of 2015, Potts went through a divorce and became a single parent. During this time, she began cleaning houses and secured a work study position at ISU as a closed captioning assistant to help support herself and her children.

“The most challenging part of getting my degree was raising two small children in the process,” Potts said. “I had to balance home, work and school life while ensuring I took care of myself as well. There were many times I had to sacrifice work for school work, but time for my kids and school had to come before anything else.”

Despite these challenges, she was able to overcome them and become a stronger student in the process.

“I am so thankful for my mentors, professors, and advisors who were there to encourage me – Dr. Hermanson, Tracy Farnsworth, Sue Schou, and Traci Chandler, just to name a few,” Potts said. “The most rewarding part of my time at ISU is the people I have met.”

“Even though I faced tremendous challenges every semester, it is now spring 2017 and I am ready to graduate,” she continued. “It was challenging, but worth it.”

After graduation, Potts hopes to begin working as a clinic manager within a health care organization. She also plans on pursuing an MBA, and her vision is to be the CEO of a hospital within 15 years.