POCATELLO --Works by local composers, and several Pocatello premiers will be featured in the upcoming concert of the Idaho State University Wind Ensemble and Civic Concert Band. The concert will take place on April 21 at 7:30 p.m. in the Joseph C. and Cheryl H. Jensen Grand Concert Hall in the L.E. and Thelma E. Stephens Performing Arts Center. 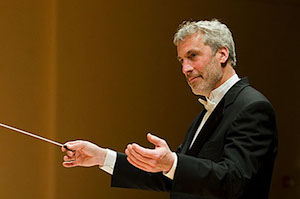 The Wind Ensemble portion of the program will feature two Pocatello premieres, “Adagio ma non troppo” by Charles Mingus, and “Symphony no. 4” by David Maslanka.

American jazz bassist, composer and band leader Charles Mingus recorded “Adagio ma non troppo” in 1971 on his album “Let My Children Hear Music.” “Adagio” began its existence as a piano improvisation titled “Myself when I Am Real” that appeared on his 1964 recording “Mingus Plays Piano.” This will be the first time “Adagio” has been heard live since it was recorded. Brooks did the work of transcription while on sabbatical leave in the fall of last year.

The Wind Ensemble will also perform “Symphony no. 4” by Missoula composer David Maslanka, an expansive, emotional work. Maslanka said the piece emerges out of “the spontaneous rise of the impulse to shout for the joy of life.” The symphony is a single movement work approximately 28 minutes in length, and requires an expanded ensemble that includes piano, harp, organ, contrabassoon and bass.

The Civic Concert will open the evening with a program of local, contemporary compositions. “Landmarks,” by Century High School band director Colin Brien and “Opening Music” by Brooks. Students Jedd Greenhalgh and Christopher Rhoades will present “M. Draimovitch Receives Penance for Leading His Sickly Crew Into the Mysterious Swamps of Ishfwilf,” with violin and clarinet soloists. “Polly Oliver” is an English folk song arranged by Thomas Root, who recently retired after 31 years as director of bands at Weber State University in Ogden, Utah.

“Opening Music” was composed by Brooks while he was on sabbatical leave in the fall of 2008, and was inspired by the construction of the Stephens Performing Arts Center and Jensen Grand Concert Hall.

“‘Opening Music’ was dedicated to and meant to reflect the thoughtful work and the grandeur that was the result of the construction of the L.E. and Thelma E. Stephens Performing Arts Center in 2004,” Brooks said.

Admission is free to all ISU students, $8 for the public, $6 ISU faculty and staff, and $4 for pre-college students. For more information contact Brooks at broopatr@isu.edu.