POCATELLO – Following World War II the U.S. government had a plethora of surplus items leftover, including big “pontoon” rafts, some that were shipped to Grand Teton National Park. During the war, these rafts were tied together and tracks were laid across them so military vehicles could use these “pontoon bridges” to cross waterways.

At Grand Teton National Park in 1950s, Frank Ewing, who worked for Grand Teton Lodge Company at first and later ​became a pioneer scenic rafting guide on the Upper Snake River running through the park, noticed piles of the pontoon rafts being unused.

​Grand Teton Lodge Company had tried using some of them lashed together as docks on Jackson Lake, but they had deflated, according to Idaho State University researcher Dr. Yolonda Youngs.

​Later in the early 1960s, ​Ewing established his own rafting business ​and started testing different inflatable boat designs, “playing around with the boats, making them efficient to use for floating the upper Snake River,” said Youngs, an ISU assistant professor in the Department of Global Studies and Languages in the College of Arts and Letters. 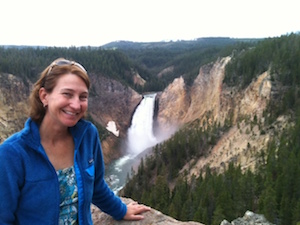 Ewing eventually co-founded a raft guiding business with partner Dick Barker that is still in operation today. Ewing and Barker, along with other pioneering guides and park concessions, helped shape the unique culture and style of river rafting and other outdoor activities that were developed in the park and shared elsewhere.

“Specifically, we'll be tracing how pioneer river and mountaineering National Park Service rangers and commercial guides and companies developed a distinctive style of outdoor recreation that shaped how people ran rivers and climbed mountains all around the western United States,” said Youngs, assistant professor in the ISU Department of Global Studies and Languages, the project’s principal investigator. “It’s a fun project.”

Youngs and her collaborators have begun work on a four-year, $118,000 project funded by the National Park Service. The official title of the project is “Adventure Outdoor Recreation History and Management in Grand Teton National Park.”

Youngs and the ISU graduate student Joel Adams may be uniquely qualified for completing this project. Youngs was a professional whitewater rafting guide for 10 years, who cut her teeth learning that trade in Grand Teton National Park and Dinosaur National Park and then guided on other rivers throughout the American West. Adams, who is graduating from ISU with a physical education degree and entering an ISU geographic information systems (GIS) master’s degree program this spring, has also been a professional whitewater guide in the American Southwest.

“I actually started rowing on the Upper Snake. This is the exact 30 miles of river miles that I first learned how to row a boat and the first whitewater section I ever captained a paddle boat,” Youngs said. “In some ways this is my community. Some of these people (being interviewed) are people who had a tremendous influence on my guiding career.” 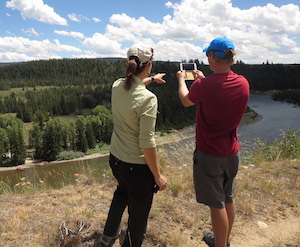 The ISU duo, working with Grand Teton National Park cultural resources staff and managers, will conduct oral interviews of pioneer river and mountaineering commercial guides, company owners, and NPS rangers, and digitize hundreds of photos and historic documents to create a new addition to the NPS archives for the park, that will eventually be shared with the public. They will also do “repeat photography” of spots, matching historic photographs with contemporary images at river and mountain spots throughout the park.

“From our early research with river guides and companies, what I’m finding fascinating is the experiences of guiding and working on the Upper Snake influenced people for the rest of their lives in terms of their careers and environmental values. Politicians, university professors, scientists, doctors, and all kinds of people who started at the park, went on to successful and long careers in environmentally related fields,” Youngs said.

“And because it is Grand Teton National Park that draws visitors from around the country and the world,” she continued, “influential people such as U.S. Secretary of the Interior Stewart Udall and Ladybird Johnson, for example, visited the park in 1964 and floated down the river with Grand Teton Lodge Company.  So, for me, it’s a great way to tell a local story, a regional story and national story and we’re doing it through mountaineering and river, commercial guides, companies, and NPS rangers.”

This new grant is building on years of ​research compiled by Youngs.

​Youngs said she is excited about sharing all the information being collected with the public.

“This will be a new collection for the park’s Snake River use and management history – and all this will be public once it is processed by the park service,” Youngs said. “With our partners from the river and mountaineering communities and the NPS, we are contributing to a new, public history on outdoor recreation culture that has been substantially missing or under researched for the park’s historical record.”