POCATELLO – In the new book “Resurrecting the Shark: A Scientific Obsession and the Mavericks Who Solved the Mystery of a 270-Million-Year-Old Fossil” to be released on April 4, author Susan Ewing combines her research with that of Idaho State University researchers Leif Tapanila and Jesse Pruitt to tell the history of the shark known as Helicoprion, also nicknamed “buzzsaw shark." 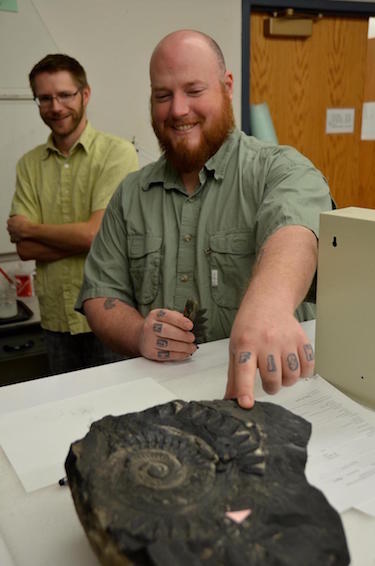 People have been discovering fossils of this animal for about 100 years, most of which have been found in Idaho. What makes this species so distinctive is the large spiral of teeth located in the animal’s lower jaw, which led to the nickname “buzzsaw shark.”

When people first began discovering the fossils, they were commonly thought to be fossils of ammonites, an extinct group of marine mollusk animals.

People eventually realized they were actually shark teeth, but no shark today has anything resembling this spiral of teeth. This was what led to Pruitt and Tapanila researching this strange shark further.

“I was downstairs in the museum trying to find something to do my undergraduate research on, and I saw this spiral of shark teeth that I recognized from a show on the Discovery Channel,” Pruitt said. “I decided I would try to find out what caused the teeth to spiral.”

Tapanila said that when he and Pruitt first began their research, nobody knew why the shark’s teeth grew in a spiral.

“We found out that the person who knew the most about this animal at that point was an artist based out of Alaska named Ray Troll,” Tapanila said. “He’s a shark and fish enthusiast, and Helicoprion has been his main passion for over 20 years.”

“He has actually worked with a number of different researchers over the years trying to figure out what this animal was,” Tapanila continued. “Jesse got in contact with him fairly early on because Ray turned out to be an expert on this animal. This project ended up being a collaboration of science, art and history all coming together.”

Tapanila said that once he and Pruitt began researching the shark further, they realized that the answer to its bizarre lower jaw had been sitting in the museum basement for the past 60 years.

“We have this rock on display in our museum right now, and it has a spiral on it on the outside and the jaw is on the inside of it,” Tapanila said. “By virtue of CT scanners, we were able to take that technology and look inside the rock, which is not something people could have done in the past.”

Pruitt brought the rock to a specialized CT scanner in Austin, Texas, where he was able to see that the spiral was surrounded by the lower and upper jaws of the animal. This discovery led to the conclusion that the spiral belonged in the lower jaw and that it functioned as an ever-growing series of teeth.

All sharks grow teeth throughout their lives, but this shark differed in that it did not shed any of its teeth like other sharks do. This led to some specimens having up to 150 teeth.

“Because it didn’t shed its teeth but continually added them, it had a space problem,” Tapanila said. “It solved this by creating a spiral of teeth that added new teeth at the back, which pushed the “assembly line” forward.” 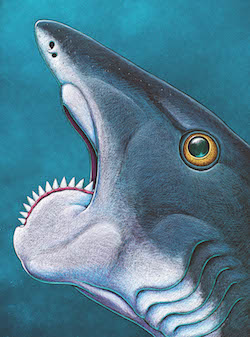 This spiral of teeth is what makes the Helicoprion so unique, because it is the only animal ever discovered that does this with its teeth.

Tapanila said that he hopes the book helps people realize the amazing things people can find in their own backyard.

“If I’m talking to an Idaho audience and I say “Idaho shark,” that immediately gets their attention because people like sharks, but Idaho is the last place you would think of to look for them,” Tapanila said. “We have the best collection of one of the craziest animals to ever live on the planet. This is our animal, and I want people to know about it. I think this book will help do that.”

Pruitt said that the evolving nature of the studies laid out in the book is remarkable.

“When people first discovered these fossils, they thought it was an ammonite because of the spiral,” Pruitt said. “In this book you get over 100 years of researchers who have found these things, and we get to see their takes on it. Every researcher has constructed this shark in a different way based on the data they had, and to see that history condensed in this book is really cool.”

Pruitt also worked with the Idaho Virtualization Lab to create an augmented reality companion app that will be released at the same time as “Resurrecting the Shark.”

The app will also be called “Resurrecting the Shark” and will allow users to use the book as a target so their phones can bring up 3D images and animations. The app will be available on Apple and Android phones.

For more information on the book or their research on Helicoprion, contact Tapanila at tapaleif@isu.edu or Pruitt at pruijess@isu.edu.  The book is available at amazon.com and goodreads.com.