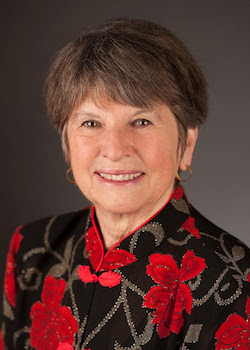 The NDEO website states, “The most prestigious award conferred, the Lifetime Achievement Award is given for exemplary leadership, scholarship and/or artistry, and philanthropy or service to dance education."

“I felt so humbled, honored, and excited when I received notification that I was the recipient of this prestigious award,” Lloyd said.

Lloyd is a founding member of NDEO, and served as their secretary from 1998-2001. She is still actively involved in the organization and has continued active membership since NDEO was first organized.

Lloyd is an Idaho dance educator and an accomplished writer for dance who travels the world sharing and teaching dance education. She has published many articles about dance education including “Pioneering dance education: Forging a pathway for the future” (in the book “Perspectives on Dance Education” in 2017). Her book “Creative dance: A manual for teaching all ages” was published in 2014 by the University of Malaya Press in Kuala Lumpur.

She taught at ISU for 25 years before retiring in 2001. She taught many forms of dance, but specialized in creative dance. She created a dance minor at ISU that includes dance technique, theory and dance education courses. She was also a visiting professor of dance at several Malaysian universities from 1977 to 2015, and was a Fulbright professor of dance to the University of Malaya and Universiti Sains Malaysia in 1999.

This isn’t the first time Lloyd has received an award of this magnitude. She also received the Lifetime Achievement Award from the Idaho Dance Education Organization in 2015.