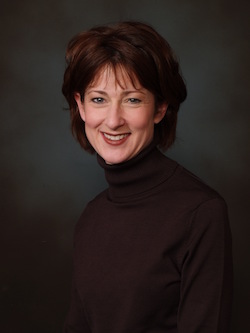 “I started as an officer of the Penn State Student Section of ANS, and I did a lot of public outreach with things like Girl Scouts and Boy Scouts workshops,” she said. “As a graduate student, I was appointed to sit on the ANS National Board of Directors. During that time, I wrote the bylaws that were later approved that allowed the student Board member to have a vote and be elected.”

She also served as an officer in the Idaho Section of ANS in the early 2000s, during which time she was able to perform more community outreach for the society.

Since then, Dunzik-Gougar has stayed active in ANS, serving in several committees at the national level and as faculty advisor to the ISU Student Section.

Additionally, she helps organize technical sessions and schedule speakers for the Fuel Cycle and Waste Management division of ANS.

In her new position of U.S. At-Large Director, Dunzik-Gougar will serve an advisory role and help vote on things such as major expenditures and changes in the way the society is organized in addition to monitoring the various bodies that make up ANS.

“Since I was active at a variety of levels and had served on the board of directors as a graduate student, I felt that I was well-positioned to contribute at that level,” she said.

Dunzik-Gougar said that one of her primary goals going forward is to increase ANS membership.

“Every similar society shares some of those same struggles,” she said. “I’m in my fifties, and my generation were ‘joiners.’ From what I understand, the younger generations are less interested in joining groups like that.”

She explained that it’s important to consider how to be relevant to younger members and think of how membership would be valuable to them.

“You have to ask, ‘How do we go forward as a society and meet the technical and professional needs of members across a range of ages and expertise, but still be viable financially?’” Dunzik-Gougar said. “It’s a challenge, but it’s a fun challenge.”

Of all the new roles her new position entails, Dunzik-Gougar said she is most looking forward to being able to have a wider view of ANS.

“My committee work over the last 10 years or so has been focused on either communications or the fuel cycle and waste management technical area,” she said. “It’s been awhile since I’ve had a broader view of the society as a whole, and I miss that. It will be nice to have the opportunity again to step back and get a bigger picture and try to use what I’ve learned to move ANS in a good direction.”