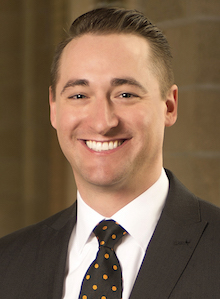 Summers, who says he is a proud graduate of ISU and excited to be working at his alma mater, was chosen from more than 130 nominees statewide.

Because of the number of nominees, the selection process was harder than ever, said several past honorees who sat on the 11-member selection committee.

“All of the applicants were very impressive,” said Courtney Santillan, director of health programs and workforce development at the College of Western Idaho. A 2015 award winner, she said the experience of reading the applications and what great things that are being accomplished by the nominees was “amazing.”

Prior to assuming his current role, Summers worked at the ISU College of Technology for four years as the director of marketing and recruitment. He chaired the ISU Social Media Committee and was a co-organizer for the Ultimate Bengal promotion. Ultimate Bengal went on to receive national recognition for its revolutionary use of social media in marketing higher education.

Originally from Idaho Falls, Stuart graduated from ISU with a Bachelor of Arts degree in international studies and a minor in mass communication. He spent four years at KPVI-TV News 6, where he was a morning show anchor and reporter. During that time, Summers was recognized as "Idaho's Up and Coming Journalist of the Year" by the Idaho Press Club.

While a student at ISU, Summers spent two years living in Mongolia as a volunteer English teacher. In addition to being a certified English as a Second Language, ESL, instructor, he also speaks Mongolian fluently and enjoys making return trips to Asia. In his spare time, Summers enjoys traveling, mountain biking, eating sushi and playing tennis.

The public is invited to celebrate with this year’s honorees at a reception and awards event on June 23 from 5:30 to 9 p.m. at the Western Aircraft Hangar at the Boise Airport.

Tickets will be available for purchase on the web