POCATELLO – Lyle Castle, who most recently has served as Idaho State University vice provost, has been appointed the interim dean for the ISU College of Science and Engineering by Laura Woodworth-Ney, vice president and provost for the ISU Office for Academic Affairs. 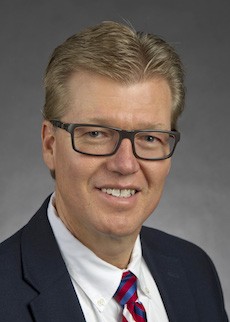 “ISU is very fortunate to have Dr. Castle's extensive academic and administrative leadership experience in this position, and I look forward to continuing to work with him in this new role,” Woodworth-Ney said.

Castle will start his new duties on June 19.

Castle received his Ph.D. in chemistry from the University of South Florida in 1992 and joined the chemistry faculty at ISU as an assistant professor in 1994. Castle advanced in rank to full professor in 2003.

His research has centered on the synthesis or aromatic heterocyclic coordination compounds for testing as photosensitizers in photovoltaic cells for solar energy production. He has authored a number of scientific publications on the synthesis of aromatic heterocyclic compounds, the photochemical properties of their coordination complexes with ruthenium, and the use of Nuclear Magnetic Resonance spectroscopy in compound characterization as well as been the editor for the Journal of Heterocyclic Chemistry from 1999 to the present.

In addition to his research efforts, Castle has taught courses for the ISU Department of Chemistry at both the undergraduate and graduate levels, and for several years taught many of the department's offerings in Idaho Falls.

He has remained active as teacher throughout his career at ISU.