POCATELLO – A free public debate, monitored by Sean Illing of vox.com. on the topic “Eliminating the Electoral College in Favor of a Popular Vote for President” will held at 5:30 p.m. Oct. 18 in the Idaho State University Pond Student Union Middle Fork Salmon River Suite. 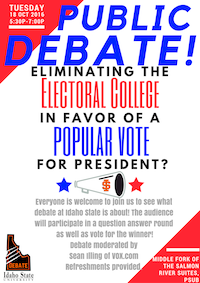 The audience will participate in a question and answer round and vote for a winner. Refreshments will be provided.

The debate and Illing’s appearance are sponsored by the ISU James M. and Sharon E. Rupp Debate Society.

Illing is Vox’s chief interview reporter, whose most recent interview was with comedian/commentator Bill Maher and film director Oliver Stone. He has a Ph.D. in political science and has taught philosophy and politics at Louisiana State University and Loyola University New Orleans. He is also a blogger and editor-in-chief at CosmoPoliticsBlog.com, and a United States Air Force veteran.  His work has been featured in publications around the country.