POCATELLO — Idaho State University’s School of Performing Arts will perform a musical adaptation of the magical story “Narnia” on Dec. 1, 3, 5, 9 and 10 in the Beverly B. Bistline Theatre in the L.E. and Thelma E. Stephens Performing Arts Center.

“Narnia” is based on the classic C.S. Lewis novel “The Lion, the Witch and the Wardrobe” and tells the story of four siblings who are sent away from their London home during World War II to stay with their eccentric uncle, Professor Kirke, at his country mansion. They stumble upon an enormous wardrobe that transports them into the world of Narnia. Narnia was once a peaceful realm of talking animals, giants and dwarves but is now under a cursed eternal winter imposed by the villainous White Witch. The four children, with help from the majestic lion Aslan, lead Narnia into war as they fight to outwit the Witch and restore peace to the land. 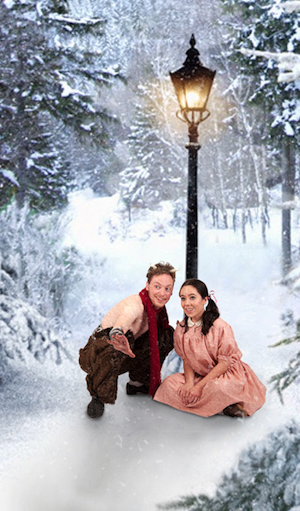 The production has elements that will appeal to audience members of all ages. Director Stefan Espinosa, assistant lecturer in theatre and dance, said the play will introduce a new generation to this world, and bring the land of Narnia to life for people who are familiar with the story.

Espinosa has taught classes in voice, dialect and fight scenes, but this will be the first show he has directed at ISU. Espinosa said when he looked at the various stage scripts of “Narnia” he wanted to find the one that best reflected what he felt when reading the book as a child.

“I wanted to find the perfect fit, and this adaptation really captures the story’s epic quality,” he said. “The music is charming, fun and quite beautiful, and helps the play become larger than life.”

The stage design, costumes, lighting and characters also help the play come to life. The stage is a rotating forest with flying snow, projections and over-the-top costumes and make-up. The cast includes 30 students, which is one of the largest casts in the School of Performing Arts history.

“Our amazing design team has worked hard to create something very special for the children who come see it,” Espinosa said. “Our actors are bringing these beloved characters to life in a fun way, and I hope this show helps everyone be kids again, puts our imaginations on stage and allows us to be transported to a magical place.”

Espinosa said his favorite part of the production is when the lion, Aslan, sings to the children at the end that the next task for them is to repair the war-torn world. Aslan tells the children that it is everyone’s responsibility to help keep the world safe through love, freely given with a generous spirit.

“I think it is magical for young people today to get to see children as the heroes of the story,” Espinosa said. “I have a great passion for children's theatre and frequently tell my actors how they will likely never know the seeds they may plant through this work, but the positive message of this play will absolutely find fertile ground in the hearts of our young audience members.”

Tickets are $15 for adults, $14 for faculty, staff and seniors, $10 for children, and $7 for ISU students. They are available at the ISU box office at 282-3595 or isu.edu/tickets. On opening night, Dec. 1, two children under eight are free with the purchase of one adult ticket.