POCATELLO — Idaho State University’s Department of English and Philosophy will host a colloquium on Oct. 21 with Matthew Levay and his talk “Never-Ending Stories: Modernism and the Aesthetics of Serial Form.” The colloquium will be held at 4 p.m. in the Liberal Arts Building Room 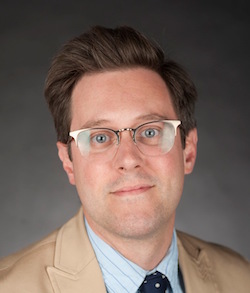 Levay’s talk examines how the experimental aesthetics of modernist fiction emerged through the unlikely form of the novel series. Commonly associated with the conventions of Victorian realism and the profitability of popular genres, the novel series represents an underappreciated but significant source of creativity for modernist authors, who utilized the form as a way of upending readers' experiences of plot, characterization, and narrative time.

Taking Ford Madox Ford's “Parade's End” tetralogy as a case study for early twentieth-century experiments in serial form, this presentation explains how the novel series became such a crucial contributor to modernist aesthetics, and why the current fascination with serial storytelling owes a profound debt to its avant-garde antecedents.

Levay is an assistant professor in ISU’s Department of English and Philosophy. He is a recent recipient of an Idaho Humanities Council Research Fellowship and has a book chapter, “Preservation and Promotion: Ellery Queen, Magazine Publishing, and the Marketing of Detective Fiction," forthcoming in “Arresting Developments: The Centrality of Crime Fiction in American Literary Culture.” He has published other work in journals such as “Journal of Modern Literature” and “Modernist Cultures.”

This event is free and open to the public. For more information, contact the Department of English and Philosophy at (208) 241-2478 or isu.edu/english.