May 4, 2015
ISU Marketing and Communications

Nicole Martin came to Idaho State University from Rupert on a track scholarship, but she never ran a race for the Bengals.

Upon arrival at ISU, she discovered she was highly anemic and could not compete in track. This setback, however, didn’t stop her from continuing her education and being an exceptionally active student. Martin, who grew up in a household with 21 other siblings and was originally from Maryland, will graduate May 9 with a bachelor’s degree in general studies and a minor in sociology. 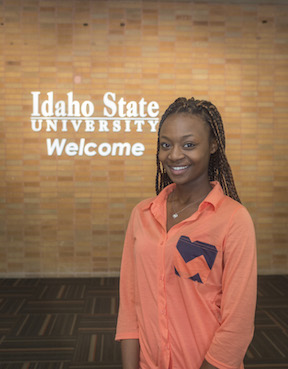 Arriving in Pocatello, she said she was struck by the community’s lack of diversity, which inspired her to restart the student chapter of the NAACP and be its president. She became active in Black History Month, Martin Luther King, Jr. Day and other community activities. She said she was well aware of the fact that she was the minority here, which she described as “shocking.”

“Idaho State University has an underrepresented minority rate of African-Americans, with about half that being African-American women,” Martin said. “Being a part of that was a big drive to graduate for me.”

Martin was extremely active with ISU’s Student Success Center and TRIO program. She was vice president of the ISU student TRIO Club and involved with New Student Orientation.

“She is a bright shining star in our office,” said Sari Byerly, director of TRIO student services. “She was always willing to help out students who were beginners in our programs and really helped out our TRIO freshmen and sophomores.”

Martin attributes a lot of her success in college to the student service TRIO, a federally funded program that provides students with a variety of support services including tutoring, advising and academic, personal, financial and career counseling.

With the help of TRIO tutoring, Martin was able to overcome her struggle with math, a subject that had given her troubles.

“TRIO was able to provide a math tutor for me to prepare for the compass test and I was able to test out of numerous math classes, and be placed into the appropriate math class to graduate on time,” she said.

Martin’s advice to her fellow TRIO members is “stay in contact with your advisor, on a weekly basis and stay involved.”

“If it wasn’t for my advisors I probably wouldn’t be graduating with as good of grades as I do,” Martin said. “I wouldn’t have gotten into graduate school as easily without TRIO either, because it’s a long process, and took me about six months to get everything in order.”

She is currently applying to graduate schools and has already been accepted to several. Ultimately, she wishes to join the military and become an international social worker.

“The military runs in my family and it was always something I have wanted to do,” Martin said. “I am adopted so working with adoptions has been something I was interested in. I thought implementing both of them would be perfect.”

“I’ve really enjoyed my time here at ISU, I’ve made so many friends and there is so much to do around town and campus if you are involved,” she said.