Animal Planet’s “River Monsters” will feature research from Idaho State University and the Idaho Museum of Natural History on the prehistoric whorl-toothed Helicoprion shark – “the most ferocious fish in the ocean during its time” – on April 19 and May 25. 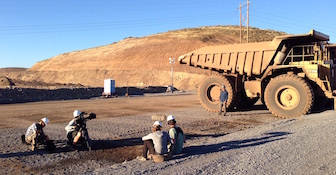 “They are running a special show featuring six or seven prehistoric monsters, including our shark, the Helicoprion,” said Leif Tapanila, acting director of the IMNH and the Idaho Virtualization Laboratory. “The segment on our shark showcases the Idaho Virtualization Lab and the type of research we can do – how our lab can produce something completely new from the fossil record. It’s the best example of how our lab works.”

“You take something hard to understand as a fossil, and then make it easy and accessible using a real-world model of a jaw that you can open and close,” Tapanila said.

Tapanila was interviewed on camera by “River Monsters” host Jeremy Wade at a Monsanto Mine site near Soda Springs where many Helicoprion fossils have been found. On camera, Tapanila compares the 3-D model to a fossil in a rock.

Helicoprion sharks had a spiral jaw with 150 teeth. 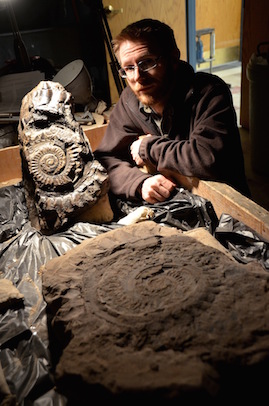 “Only 10 of those teeth were working at a time and were used as big spiral blades in the lower jaw,” Tapanila said. “A full-size Helicoprion was 25-feet long and was one of the most ferocious animals in the ocean at the time. We have the largest collection of this fossil in the world, largely coming out of mines in Idaho. It was our fossils and research that helped solve the century-long mystery of this fish and how it functioned.”

“It was the best interaction I’ve ever had with the media,” Tapanila said. “They had really done their homework, and Jeremy really knew his stuff and a lot of the interview was just a conversation between him and I. There was a lot of interaction between us and the crew, and we brought out our best fossil specimen to compare with our 3-D print.”

Animal Planet billed the new episode by saying, “Combining newly unearthed fossils and cutting edge technology, Jeremy brings horrifying, prehistoric beasts back to life in his search for the greatest river monster of all time.”

More information on the program “River Monsters” and this episode is available at http://press.discovery.com/us/apl.

More information on the Idaho Museum of Natural History, the Idaho Virtualization Laboratory and ISU Helicoprion shark research is available online at http://imnh.isu.edu/home/.