New research by Idaho State University’s Maria Wong on the relationship between poor and insufficient sleep for adolescents and them developing alcohol and drug problems has again gained international publicity.

Even before her latest research had been published Jan. 16 as an “Early View” on the website of the journal Alcoholism: Clinical & Experimental Research, Wong had completed interviews with National Public Radio, BBC, the Brazilian magazine “VEJA” and Healthline News. The full results of her study will be published in the February 2015 online-only version of the journal. 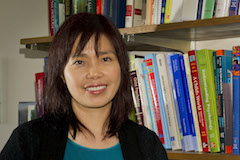 • Sleep difficulties and insufficient sleep are common among American youth.

• Problems include binge drinking, driving under the influence of alcohol and risky sexual behavior.

Sleep difficulties and insufficient sleep are common among American youth, according to Wong. Prior research has shown that poor sleep can predict alcohol-related problems and illicit drug use among adolescents and young adults in high-risk samples. A new study has found that sleep difficulties and hours of sleep can predict a number of specific problems, including binge drinking, driving under the influence of alcohol and risky sexual behavior in a nationally representative sample.

“National polls indicate that 27 percent of school-aged children and 45 percent of adolescents do not sleep enough,” said Wong, professor and director of experimental training in the ISU Department of Psychology. “Other studies have shown that about one in 10 adolescents have trouble falling asleep or staying asleep almost every day, or every day, in the previous 12 months.”

“This paper is important in that it advances our understanding of the relation of sleep to substance use problems to include not only problems sleeping, that is, trouble falling asleep and/or staying asleep, but also insufficient sleep, addressed here as hours of sleep,” added Tim Roehrs, director of research at the Sleep Disorders and Research Center at the Henry Ford Hospital, and one of the first researchers to identify sleep insufficiency as a clinical issue in the 1990s.

Among normal adults, sleep difficulties and insomnia have predicted onset of alcohol use one year later, and increased risk of any illicit drug use disorder and nicotine dependence 3.5 years later, said Wong. Among adult alcoholics who received treatment for alcohol dependence, those with insomnia at baseline were more likely to relapse to alcohol use.

The association between poor sleep and substance use has also been found in younger age groups. Overtiredness in childhood has predicted lower response inhibition in adolescence, which in turn predicted number of illicit drugs used in young adulthood. Overtiredness in childhood has also directly predicted the presence of binge drinking, blackouts, driving after drinking alcohol and number of lifetime alcohol problems in young adulthood.

The purpose of this study was to examine whether sleep difficulties and hours of sleep prospectively predicted several serious substance-related problems that included binge drinking, driving under the influence of alcohol and risky sexual behavior.

Wong and her co-authors analyzed data collected via interviews and questionnaires from 6,504 adolescents (52 percent girls, 48 percent boys) participating in the National Longitudinal Study of Adolescent Health. Data were collected for three waves – 1994-1995, 1996, and 2001-2002 – and study authors used sleep difficulties from a previous wave to predict substance-related problems at a subsequent wave, while controlling for substance-related problems at the previous wave.

“Sleep difficulties at the first wave significantly predicted alcohol-related interpersonal problems, binge drinking, getting drunk on alcohol, driving under the influence of alcohol, getting into sexual situations one later regretted due to drinking, and using illicit drugs and drug-related problems at the second wave,” said Wong. “Substance-related problems such as binge drinking, driving under the influence of alcohol, and risky sexual behavior are more important than others due to their association with reckless driving, automobile accidents, physical injuries and even death, as well as risk for sexually transmitted disease and unplanned pregnancy.”

Previous studies on adolescents were mostly drawn from high risk samples, Wong said. This study has added to the existing literature by establishing the relationship between two sleep variables – sleep difficulties and hours of sleep – and the odds of serious alcohol- and drug-related problems in a nationally representative sample.

Both Wong and Roehrs believe that parents can play a significant role regarding their adolescents’ sleep habits. Parents could monitor adolescents’ sleep, help their children develop good hygiene, and talk to them about the importance of sleep. Getting professional help is necessary if sleep problems persist.

“And remember,” added Roehrs, “when you monitor the sleep health of your adolescent, there can be two different issues: sleep difficulty and sleep insufficiency.”

Wong is also working with the Portneuf Medical Center Sleep Clinic in Pocatello on a different study, trying to get a more objective measure of the quality of sleep of 8- to 12-year olds to try to quantify some of the negative effects of poor sleep.

Southeast Idaho and regional families have the opportunity to participate in this major study. Results are private and confidential and no personal information will be linked to the data.

Anyone interested in participating in this study can call 208-228-5577 or isusleepstudy@gmail.com.

The study will be published in Alcoholism: Clinical & Experimental Research (ACER). ACER is the official journal of the Research Society on Alcoholism and the International Society for Biomedical Research on Alcoholism. Co-authors of the ACER paper, “Prospective relationship between poor sleep and substance-related problems in a national sample of adolescents,” were Gail Roberson and Rachel Dyson of the Department of Psychology at Idaho State University. The study was funded by the National Institute on Alcohol Abuse and Alcoholism.