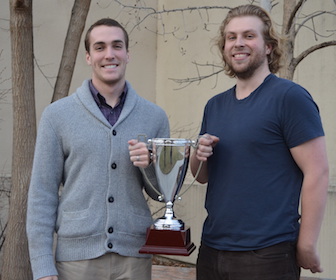 Sixteen schools from across the northwest participated in the tournament hosted at Gonzaga University’s campus, in Spokane, Washington. There were 61 debate entries across three divisions of debate. Idaho State participated in British Parliamentary debate, a team debate that features a persuasive speaking style on topics pulled from recent news stories.

ISU debaters supported and opposed a variety of topics over five preliminary rounds. Both ISU teams were on the supporting side of instituting quotas based on socio-economic status in public schools, and argued against the food industry having an obligation to make currently unhealthy foods healthier, according to Sarah Partlow Lefevre, ISU professor and director of debate.

The final round topic focused on media stereotypes. Loftus and Byron were required to support the position that television actors of a minority group have a moral obligation to reject roles that are negative or stereotypical. Their primary argument was that negative or stereotypical roles violate a person’s basic human dignity, and that actors should reject these roles to protect their own sense of human worth.

Also in the final round were teams from Carroll College, Gonzaga University and Northwest University. A panel of judges from regional universities ranked each team in the debate. Idaho State’s team took fourth place and Gonzaga University’s team, that also supported actors’ rejection of stereotypical roles, took first place in the round.

“The final round was a tough debate, with excellent arguments from all of the teams involved,” said Willow Moline, ISU assistant director of forensics. “Patrick and Jason gave speeches that were compelling and engaging, and reflected the work they have been putting into developing their skills.”

Also competing for ISU were junior Aurora Zantman, Kuna, and freshman Cameo Curnutt, Las Vegas. Zantman and Curnutt took second place in over half of their rounds.

“Cameo and Aurora did very well, especially considering that this was the first tournament for Cameo,” Partlow Lefevre said. “They have grown as debaters and can be very proud of their performance.”

Idaho State Debate will be travelling to Salem, Oregon the last weekend of February for the Hatfield Memorial Debates, before wrapping up the season in early March at the Pi Kappa Delta National Tournament, hosted by Ohio University.