“I am so proud of our team’s outstanding work this past year on behalf of this great University,” said Adrienne King, director of the Office of Marketing and Communication at ISU. “Our team is dedicated to sharing the stories of our Bengal community across communications platforms.”

During the 2014-2015 period, the Collegiate Advertising Awards Program received more than 900 entries from across the country, which were reviewed and scored by a national panel of industry experts. Awards were issued for entries that received top marks and were therefore part of the top 16 percent in the nation. 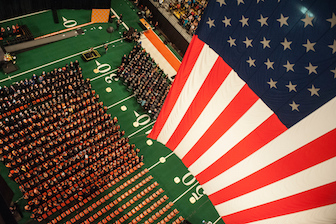 In addition, the University received a Diamond Award for the “Class of 2014” photo by Bethany Baker and an Opal Award for the “Game-Winning Catch” photo by Career Path Intern Dustin Nicholas.

Eastern Idaho’s premier awards for advertising creative work, the Gem Awards, which are awarded by the Idaho Falls Advertising Federation, were presented to ISU at the ceremony on Thursday, Feb. 26, at the ARTitorium’s MC Theatre in Idaho Falls. The two Diamond Award winning entries will advance to the Rockie Awards in Boise.
###