In the morning on April 23, Idaho State University volcanologists were setting off an artificial volcanic eruption plume in a the ISU Volcanic Simulation Laboratory; later that day, using the knowledge they collected in that lab, these scientists were analyzing Chile’s Calbuco volcano eruption, charting the plume’s characteristics. 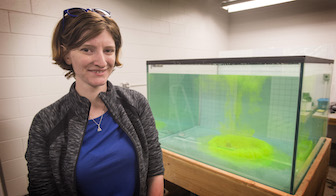 “This research is all about using tamed, captured, artificial plumes and to understand this process so we can understand what is happening in the real world plumes,” Nawotniak said. “Understanding how the ash is mixing with the air is critical and determines if the ash raises up into the atmosphere and becomes a hazard for aviation, or (the plume) collapses down a valley and harms people.” 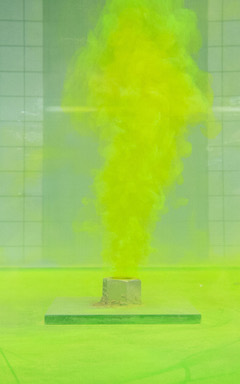 Fisher and Nawotniak simulate volcano eruptions by “erupting” colored water and sometimes debris in a tank of water that has a scaled grid on its back wall, and measure and film the results. The information they’ve learned and software they have developed from the tank activities they now use to analyze video of actual volcanic eruption plumes filmed and posted on social media. Hours after Calbuco exploded yesterday, April 23, they had completed an analysis of the volcano plume using video of the eruption.

“But understanding how that mixing occurs in the lab, we can now get live data from an eruption that we can use for hazard analysis to keep people safe,” Fisher said. “I am using our tamed volcanoes to understand mixing and create tools we are applying on real volcanoes.”

Fisher, who has worked on this project three years, said it has been a fun and interesting project, helping to create the lab and analyzing test results.

Nawotniak described ISU’s Volcanic Simulation Laboratory as “one of the premiere eruption tank, simulation facility in the United States.” She also noted that the researchers are creating a tool that will be accessible to general users and not just to scientists.

“We got into volcanology because we like things that explode,” Nawotniak joked. “It’s good to use that fascination to be able to drive research that can help with communications to keep people safe.”