May 5, 2015
ISU Marketing and Communications

After spending nearly three months in the Frank Church River of No Return Wilderness last summer John Whiting, who will graduate from Idaho State University this summer with a Master of Science Degree in geosciences, found it strange to stand on concrete.

“I was out there 101 days, and when I flew back just stepping on the sidewalk was a weird feeling,” Whiting said. “Just having that kind of level, smooth ground under my feet for the first time after living 100 days without it, just felt odd. It blew me away. The whole summer was incredible.” 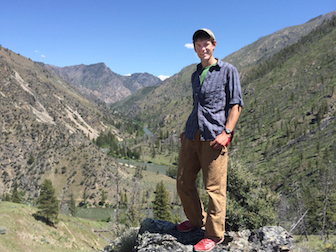 The first day after he flew into the Taylor Wilderness Research Station last April, Whiting saw a cougar. One of the last days there he saw two wolves. The station is located in the middle of the largest wilderness area in the lower 48 states on Big Creek, about eight miles from the Middle Fork Salmon River.

“Those were the highlights as far as wildlife goes, but I was there with some amazing people, too,” said Whiting, who is originally from Connecticut, but earned his undergraduate degree from Whitman College in Walla Walla, Washington. “The people who take care of the Taylor Ranch (a facility owned and administered by the University of Idaho) and live there all year long, the Gag family, were an amazing group of people, and it was just fun being out there with them and the other researchers.”

Whiting walked hundreds of miles off trail and would spend nights away from the research station while completing his research, which was mapping how streams expand and contract, and setting up stations to measure tree-sap flow rates to understand plant transpiration rates in three different climate zones. He set up sophisticated data-collections stations in rain, snow and transitions zones to monitor the different transpiration rates by Douglas Fir trees in those zones, measuring the amount of moisture the trees release in the air.

He was studying if plant water use in rain-dominated low elevations is different of that in snow-dominated elevations, which has important implications for water storage and water quality, particularly if the climate changes.

He encountered some unique challenges while attempting to complete his research. He discovered that black bears were attracted to the shiny insulation that he wrapped around sap-flow sensors that he had inserted into the trees.

“In the Frank Church we discovered we had to wrap a black fabric around the shiny stuff, because if we didn’t have the black fabric the bears ripped them up,” Whiting said. “After we covered them up we didn’t have that problem, but it was so sad to lose a sap-flow sensor. Each one takes hours to make. You lose one and it is a sad moment.”

He constructed the sensors himself, with the help of ISU lab assistants including undergraduates Dylan Refaey and Kimberly Archibald, using hypodermic needles and soldering them together with miniscule wires. The data stations he set up included solar panels hung in the tops of trees and batteries used to power a variety of sensors setup that where all connected by data cables to data logger, which researchers can plug their laptops into to download the data collected.

It wasn’t all work, however. For example, Whiting went on a backpack trip with a group of undergraduate interns from the University of Idaho who were at the Taylor Wilderness Research Station. This group hiked from Taylor Ranch up into the Bighorn Crags.

“We hiked to the Middle Fork, across the Middle Fork and them up a creek to Crags,” Whiting said. “From a geologist’s standpoint, it was interesting going from the river up to the granite peaks, but it was all beautiful. I caught my first fish fly-fishing in an alpine lake in the Bighorn Crags. That was pretty sweet. That place will blow you away.”

Whiting, who is looking for jobs in hydrology after graduation, thanked the DeVlieg Foundation, which provided the funding for him to complete his research. This foundation sponsors graduate stipends, inquiry-based undergraduate learning programs, and professional workshops to attract researchers to the Taylor Wilderness Research Station.

“I got to spend a summer in the Frank Church,” Whiting said. “I can’t complain. It was amazing. I’d definitely say it was a once-in-a-lifetime experience.”