May 4, 2015
ISU Marketing and Communications

There was a time Ken Harris slept with his phone on. He217;d set it next to his bed, eager to take late-night calls from a friend or classmate in need.

So it’s not surprising Harris decided to become a nurse, a career that will allow him to do what he does best while delivering a good paycheck.

Harris graduated from Idaho State University’s rigorous 16-month accelerated bachelor’s program in nursing in spring 2015. The program is the only one of its kind in Idaho and offered exclusively at the ISU-Meridian Health Science Center west of Boise. 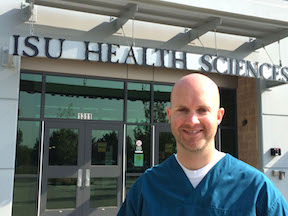 Harris’ life has changed dramatically since the days he first received those late-night calls. The 30-year-old is now married and a hands-on dad to three children under age 5 with a fourth due in late July. Despite a hectic life, Harris has landed on the ISU dean’s list twice and is a member of Sigma Theta Tau, the international honor society of nurses.

How has he managed it all? Harris is quick to thank his supportive wife, Rachel, who held two part-time jobs while he completed school. Harris also worked part time while honing his time-management skills.

“Do what matters most at any given time,” he advises. “Some pieces may fall, but they don’t have to be the important pieces. You learn to select the ones you are not going to worry about.”

Harris, who grew up in southern Utah, entered the accelerated nursing program in 2014. Before moving to Meridian, he worked in the customer support division at Portneuf Medical Center for a year. In Pocatello, he and his young family lived with his wife’s grandfather – a retired Pocatello cardiologist – who encouraged Harris to study nursing at ISU.

To enter the accelerated nursing program, students must have a bachelor’s degree from a regionally accredited university or college.

As for the future, Harris is considering a career in pediatrics, a rotation he enjoyed at ISU-Meridian.