NASA personnel gathered in Pocatello recently to meet with researchers at the Idaho State University GIS (Geographic Information Systems) Training and Researcher Center and with professionals from state and federal land agencies to work on a GIS-satellite imagery system used to manage wildfires. The focus was the wildfire RECOVER project, led by ISU’s Keith Weber. 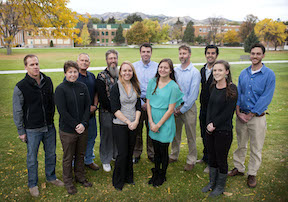 John Schnase, a senior computer scientist at the NASA Goddard Space Flight Center, a co-principal investigator on the Rehabilitation Capability Convergence for Ecosystem Recover (RECOVER) project, described RECOVER as “one of NASA’s most exciting projects” that is going “gangbusters.”

The prototype of the RECOVER project was designed for use in rapidly planning the recovery of wildfires. In the initial testing of the program during the last year, however, its creators and users in the field discovered that RECOVER was also valuable for the active management of ongoing wildfires. Developers are now considering and exploring the system’s capabilities to assess the risk and prevention of future wildfires.

“Last year we developed the capability called RECOVER, a system that uses Cloud computing and high-performance computing to go out and get a lot of information very quickly and put it in an analysis environment made available to agencies that fight wildfire,” Schnase said. “We sought input from our partners to evaluate the system and we got very good feedback on how to enhance the program.”

Now the ISU/NASA team is working on a three-year grant from NASA’s Applied Sciences program to move the prototype of the RECOVER program into an operational production tool – an easily used software program – that wildlife managers can use in their day-to-day operations.

“This was our first science team meeting to outline the next three years of this effort,” said Keith Weber, ISU GIS Director and principal investigator on the RECOVER project. “We have had a series of meetings and fieldtrips to meet our colleagues, get everyone oriented, and discuss the science of the project. With this agenda, it was essential to meet in person.”

The goal for the first year is to “mature and harden” the RECOVER system to make it better and easier to use by state and federal fire-fighting agencies in Idaho, then over the final two years expand the use of the RECOVER program to additional local, state and federal programs, and to expand its scope to support firefighting activities in all of the western United States.

NASA personnel on campus included four from the Goddard Space Flight Center in Maryland, working directly with Weber’s team at the GIS Center, and five from the NASA DEVELOP program headquartered at the NASA Langley Research Center in Virginia. The latter group will work on science research questions related to wildfire ecology. The data they produce will eventually be incorporated into the RECOVER program.

“In some ways the work being done by the NASA DEVELOP program is completely separate from us, but the research they are doing on wildfire is applicable to RECOVER and we hope to put it to use,” Weber said.

Representatives from the NASA DEVELOP program were also on campus evaluating ISU as a potential DEVELOP node, where NASA scientists could continue collaborations well into the future.

“We could have NASA DEVELOP students and scientists coming to ISU every semester continuing to do research, to keep answering questions related to wildfire,” Weber said. “The relationship with NASA has been a great experience for us at the GIS Center, a great benefit for Idaho State University, and the whole state of Idaho not only for wildfire fire research and management, but also for its benefit to our students.”

The RECOVER wildlife recovery program has already earned recognition: it has been given an Exemplary Systems in Government award by the Urban and Regional Information Systems Association (URISA).

The Exemplary Systems in Government awards are given in recognition of an improvement in the delivery and quality of government services through geospatial information.

“It’s really cool for RECOVER to be recognized in this way,” Weber said. “URISA is the leading GIS professional organization in America. We’ve really pushed the envelope when it comes to smart maps like RECOVER and our peers recognize it.”