NASA/ISU RECOVER Program to be expanded to cover most western states; Project has broad range of uses for natural disaster recovery

This system has already been tested successfully in Idaho and will be expanded for use throughout the western United States so it can used to help fire managers battle the large types of blazes that have occurred in Oregon, Washington and California this summer.

“This is a game changer for wildfire prevention, mitigation, and recovery after a fire,” said Dr. Howard Grimes, ISU Vice President for Research and Economic Development. “Using big data approaches to solving real problems is a new, and critical, direction for GIS researchers.”

It takes only 5 minutes for the Rehabilitation Capability Convergence for Ecosystem Recovery (RECOVER) system to produce a detailed report that gives the Bureau of Land Management or other agency wildfire managers the information they needed to plan for the recovery of a wildfire and it can also be used for the active fighting of a wildfire. 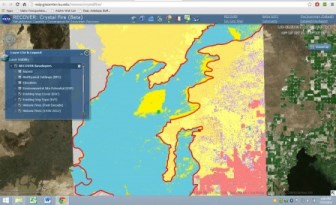 In the past, the information collected on everything from burn severity and fire intensity to slope, vegetation and soil type would have taken as long as weeks to collect and distribute. Now the distribution of that information – to firefighters in the field on their cell phones and other mobile devices and to managers on their computers in remote locations – takes just minutes and field updates can occur almost live.

RECOVER was developed for the state of Idaho during the last fiscal year with funding from NASA’s Applied Sciences Program. During the next three years, with an additional $1 million in funding, this innovative program and firefighting tool will be expanded to be used in states including California, Colorado, Utah, Nevada, Oregon, Washington, Montana, Wyoming and Arizona.

Its creators and emergency managers are only now beginning to understand the many uses for RECOVER.

“It can be used for recovery following any natural disaster; earthquakes, large landslides, hurricanes and other disasters of similar magnitude,” said Keith Weber, director of the ISU GIS Training and Research Center, and principal investigator on the project. ”It is a framework and a foundation to support decisions on recovery management during, just after an event and for long-term management.” 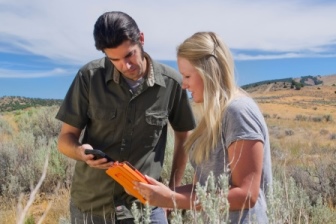 The new program, while still in its testing phase, proved its worth last year on large fires in Idaho such as Pony and Elk Creek Complex Wildfire in south-central Idaho.

“We have data for Idaho now, but soon data will be available for the rest of the Western United States as we expand RECOVER’s scope,” Weber said.

NASA and ISU initially partnered with the BLM and the Idaho Department of Lands, but plan to extend their partnerships to the U.S. Geological Survey, U.S. Forest Service, the National Park Service, Idaho Transportation Department and other agencies.

“We’re very excited about moving RECOVER into operational use over the next three years, and involving other partner agencies is a huge boost to the project. RECOVER is an important contribution by NASA’s Applied Sciences Program to the nation’s wildfire management efforts,” said John Schnase, senior computer scientist at the NASA Goddard Space Flight Center.

He said that RECOVER creators are using a variety of advanced cloud computing, web services, and data grid technologies to dramatically improve the decision-making activities associated with fighting wildfires.

“We’re also setting the stage to use new types of observational data that will be produced by future NASA missions,” Schnase said.

RECOVER is a computerized decision support system that is automatically deployable and site-specific. It brings together in a single application the information necessary, in the form of multi-layered GIS maps, for Burned Area Emergency Response (BAER) teams to plan reseeding strategies and monitor ecosystem recovery in the aftermath of wildfires.

This system uses state-of-the-art cloud-based data management technologies developed by NASA Goddard Space Flight Center to improve performance, reduce cost and provide site-specific flexibility for each fire. This technology is also being used in the NASA Center for Climate Simulation, which sets the stage for using climate data products in future versions of the RECOVER system.

For more information on the RECOVER project, visit http://giscenter.isu.edu/research/Techpg/nasa_RECOVER/index.htm or http://www.earthzine.org/2013/06/22/a-new-application-to-facilitate-post-fire-recovery-and-rehabilitation-in-savanna-ecosystems/.

More information on the NASA Applied Sciences Program is available at http://appliedsciences.nasa.gov.