The bounty collected by the Portneuf River pilferers was impressive, including a flat-screen TV, bike, scooter, basketball hoop, car battery, miscellaneous other car parts, lots of metal, two soaked pillows, a mattress and some things too sordid to mention.

Volunteers from the Idaho State University Stream Ecology Center, the City of Pocatello, Portneuf Watershed Partnership, and Valley Pride members joined citizens and Boy Scouts to removed piles of debris and trash from the Portneuf River channel during Clean the Portneuf 2014 held Sept. 13. 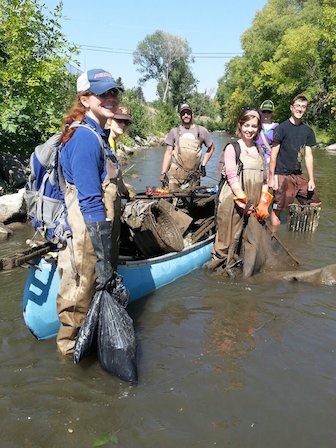 “We had an awesome community cleanup today with dozens of volunteers from those into their 80s down to infants, and we had folks floating the river,” said Hannah Sanger, science and environmental division manager for the City of Pocatello, and event organizer. “We filled six dumpsters of trash, so that is awesome.”

The volunteers associated with the ISU Stream Ecology Center included current undergraduate and graduate students, graduates, and a faculty member with two daughters who assisted.

“This was absolutely necessary based on the amount of crap we pulled out of the channel and it has just been one year,” said Danelle Larson, a post-doctoral researcher in the ISU Stream Ecology Center. “We’re very thankful a lot of people were here to help.”

The group from the ISU Stream Ecology Center waded through a portion of the Portneuf River channel and filled a canoe beyond its capacity with everything from car rims, assorted trash, water-soaked rugs, and much more. After they filled up the canoe they carried or dragged other debris down through the channel to where it ends a couple blocks west of Raymond Park. 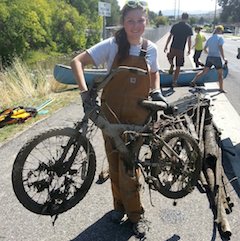 “This is how we earn our time on beautiful, more pristine rivers,” said Colden Baxter, ISU biological sciences associate professor and director of the ISU Stream Ecology Center. “We do our best to help steward some of the ones that have been ignored.”

The ISU Stream Ecology Center has completed many studies on the Salmon River, Yellowstone National Park streams, the Colorado River in the Grand Canyon and a variety of other watersheds, mostly where they don’t run through the middle of a mid-sized city.

Hannah Harris, a stream ecologist for the Idaho Department of Environmental Quality and a graduate of the ISU Stream Ecology program, said, “We don’t have too much access to the river where it is a big concrete channel, but it is good to see it once a year and interact with it. It was cleaner than other years.”

At the end of the cleanup, lasting several hours, Baxter, like the rest of his crew, was covered with a little of the river’s less clean aspects, and gathered on the lawn of a house next to the river to get rinsed down by a garden hose.

“Every year we pitch in and help with the process, but it is a community event,” Baxter said. “With our bare hands we dredged the Portneuf channel and now we’re looking for a good hose down.”