Dr. Jack Rose, an Idaho State University physiology professor, recently returned from a two-week long trip to China, after which he was asked to serve as an advisor in ongoing research.

The purpose of his visit was to deliver two different talks in which he presented findings from research he has done at ISU. 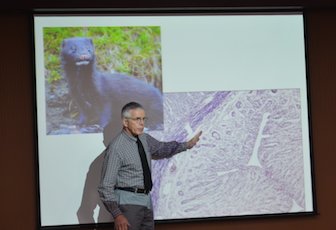 Rose was invited by the Chinese Academy of Agricultural Sciences’ (CAAS) Institute of Special Economic Animal and Plant Sciences, to come and share research findings from his laboratory related to the endocrinology (study of the endocrine system and hormones) of embryo implantation in mink.

Rose is a Ph.D. graduate of Oregon State University and has been investigating the role of hormones in mink reproduction and fur growth for over 35 years. He has done extensive research on mink endocrinology and has authored or co-authored more than a dozen scientific publications on that subject.

The first lecture that he delivered was on a possible explanation for prolactin induced termination of embryonic diapause in mink. “Embryonic diapause” refers to a dormant state which mink embryos enter after passing into the uterus.

“While seemingly technical, the significance of the first lecture is really very simple,” said Rose, “If we can discover a way to induce embryo implantation at an earlier than normal time, all evidence suggests that litter sizes will likely increase in mink.” 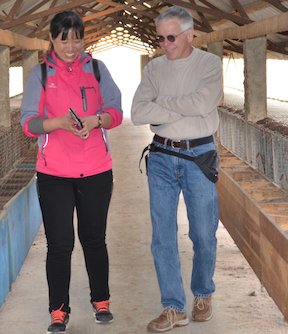 His second talk was about uterine Glycogen metabolism during mink reproductive cycles, which essentially the system that nourishes the mink embryo before the placenta is fully developed.

“If the uterus cannot provide sufficient nutrients, in the form of glucose, to the embryos, they may fail to develop and degenerate,” Rose said. “Mink as well as other domestic and farm animals such as pigs have numerous offspring during each reproductive cycle.”

The lectures were intended not just to present his findings but also to outline possible research areas and collaborative projects for Chinese and American researchers. Chinese scientists are beginning a strenuous research effort to improve mink litter sizes through controlling the development of embryonic diapause, which could have enormous worldwide implications if developed and implemented for farm animals.

Rose’s study of mink might also have an impact on other mammals, and even humans. There is every possibility that the work done by Rose and other scientists could eventually be used to aid human fertility or for birth control.

“Most reproductive failures are the result of the embryo not implanting in the uterus. That’s true in humans as well,” said Rose, “If we can get this to work in mink, then why not people? In fact, I first had the idea to research this from studying the human menstrual cycle!” 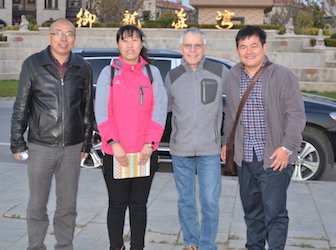 While in China, Dr. Xinyan Cao, a new scientist at the CAAS, took Rose to several mink farms (one supported by the Chinese government), and one Sitka Deer facility, where the deer are being studied by Institute scientists.

While most of Rose’s time was in Chang Chun City, he did have the opportunity to visit several sites in and around Beijing. Ming Jie Xing, a graduate student at the CAAS, took Rose to The Great Wall of China, Tiananmen Square, The Forbidden City, and The Summer Palace. “It was truly a once in a lifetime experience for me. And all the more so, since for some of the sites, it was the first time that Xing had been there as well.”

“This being my first time in China, I obviously found the culture very different. And I was determined to immerse myself in it as much as possible. As result, I ate only Chinese food while there, an only used chop sticks. It was delicious! Well, most of it was.”

Cao, who is also the person who invited Rose to China, will lead studies in China to investigate mink embryo activation and implantation.

“It was a real honor to be invited by another country, as adjunct professor, to present our research findings,” said Rose. “And even more rewarding to be asked to both mentor and collaborate with Dr. Cao in the future.”

“It’s early to say how my trip will affect the ISU and CAAS,” said Rose, “but Dr. Cao and I are very optimistic about working together in the future.”

“It may be that Chinese students will come to ISU to obtain graduate degrees in reproductive biology,” Rose continued. “That knowledge and training could be taken back to China, and used to increase farm animal production to aid in feeding their tremendous and growing population. At this time, simply having more scientists, unified in addressing problems related to embryo implantation, should increase our research productivity in the future.”