Samantha Lange, 24, had a good reason to miss her department’s new student orientation at Idaho State University-Meridian in late August.

The first-year physician assistant studies student was in New York City, competing for $1 million and a Las Vegas show on NBC’s “America’s Got Talent.” 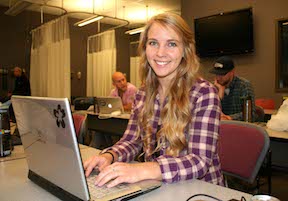 Lange was performing with the national jump rope team Flight Crew, which made the 2014 semifinals of the top-rated talent show.

“It was a blast. I loved it. It was the best experience,” she said during a break between classes at ISU-Meridian.

Lange is entering the third month of the 24-month Master of Physician Assistant Studies Program. The P.A. program blends her love for microbiology—she holds a bachelor’s degree from University of Idaho—with an interest in medicine and a desire to help people.

“The human body is like a puzzle,” she said. “When a piece to that puzzle is missing, you have to try and put it back together.”

Raised in Eagle, Idaho, Samantha started jumping rope in elementary school. She participated in the American Heart Association’s Jump Rope for Heart Program and started performing with her school’s team when she was in the third grade. In eighth grade, Lange jumped with the award-winning Summerwind Skippers before joining the national jump squad Flight Crew. Both teams are based in Boise.

Every kid has probably jumped rope, but Flight Crew’s brand is extreme—seven guys and three girls performing flips, syncopated steps, spirals projected from trampolines and other gymnastic moves that seem to defy gravity. Performance requires finesse, athletic ability and guts. Judge Heidi Klum was so impressed with Flight Crew’s technical skill and showmanship that she brought the team back for the semifinals as her wild-card act after the jumpers were booted off in an earlier round.

Lange says she’ll never forget the thrill of performing before a live audience in Radio City Music Hall—one of the most famous stages in the country and home of the Rockettes. Close to 10 million viewers tuned in for the Aug. 26 semifinals, according to Nielsen ratings. Despite a flawless performance, Flight Crew was eliminated from the show that night.

“We can’t be sad we didn’t make it any further than we did because it was such an amazing experience,” said Lange. Thanks to the national television exposure, Flight Crew has been invited to perform at NBA half-time shows and university athletic events around the country.

Lange’s academic commitments have kept her grounded in the Treasure Valley for the time being, but she still helps coach the Summerwind Skippers. She says the discipline of a demanding sport like jump rope has prepared her for the rigorous P.A. program.

“I know the importance of committing to something and being there,” she said. “Becoming a physician assistant is a once-in-lifetime opportunity and I plan to make it work for me.”