Ever since Pedro Moreno Leon was a child, it was his dream to work at a power plant.

Leon, ISU’s only Venezuelan student, is well on his way to fulfilling his dream of becoming a nuclear engineer.

At just 19, he left his home in Venezuela to pursue a bachelor’s degree in nuclear engineering at Idaho State University. 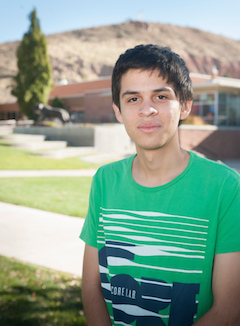 Originally from Tariba, a small town in the western state of Tachira close to the capital, San Cristobal, Leon studied ELS English for several years, which influenced his decision to come to ISU.

ISU is one of the universities that accept ELS certificates. Pedro also received a scholarship from the University, making his hope of coming to ISU a reality.

“I always wanted to study nuclear engineering but there was no way to do it in Venezuela,” said Leon, “When I saw that ISU offered the degree, I immediately jumped at the opportunity. I do not have any doubt about my major and there is no way I would change it.”

Leon said that after he applied to ISU, he was amazed by how quickly the University responded and provided the necessary paperwork he needed to submit to the Venezuelan government.

Leon commended the faculty and staff at ISU for their efficiency, particularly in dealing with international students. He also said that the students at ISU were all very welcoming and made his transition into the University easier.

“I’ve met a lot of people from other countries at ISU,” said Leon, “In Venezuela, there is not as much cultural diversity. At ISU, I’ve been given an opportunity I never had before – to show and teach people about my culture and to learn something about theirs.”

“This is one of the best things about ISU,” Leon said, “There is no discrimination here.”

His hobbies include reading, playing soccer and learning Japanese as a third language. He said learning Japanese can sometimes be difficult since he is still learning English, but it was worth it since it makes him more diverse. Leon is also a member of the ISU Hispanic Awareness Leadership Organization.

Leon said that his hope for the near future is to complete his degree, and possibly pursue a master’s degree at ISU.