Unless you are Eric Burgett.

The Idaho State University professor is on a quest to create pure, single crystals of uranium and uranium oxide so researchers at Idaho National Laboratory and elsewhere can better understand the material and design higher performance fuels to power nuclear reactors.

Burgett and his team of graduate students have successfully manufactured cerium oxide crystals as a practice run (cerium can be a nonradioactive surrogate for uranium or plutonium). The team produced its first uranium oxide crystal in June at ISU's Research in Science and Engineering (RISE) facility in Pocatello. 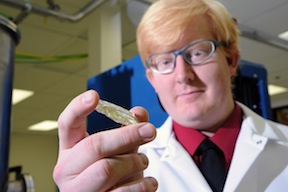 "A single crystal allows researchers to test and study a material in its simplest form," said Burgett, who also is a Center for Advanced Energy Studies affiliate.

Burgett first became interested in crystals and their potential to advance nuclear energy research as a doctoral student at the Georgia Institute of Technology.

He grew zinc oxide crystals for use in neutron detectors.  From there, he began experimenting with uranium and plutonium oxide crystals.

Researchers have long studied the physical characteristics of uranium oxide – the primary fuel for the nation's nuclear reactor fleet.

But they examine uranium oxide fuel pellets, which are composed of multiple crystallites randomly mixed together and whose microstructural makeup can vary from batch to batch. That variance makes studying it and predicting what happens to it in a reactor difficult. 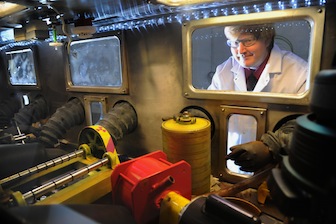 "About 95 percent of the crystals that make up the uranium oxide are randomly oriented. There is no order," Burgett said. "How can you accurately model and simulate a fuel pellet crystal with randomness? With the crystals we are growing, you can. We will be able to examine a single uranium or uranium oxide crystal and how heat moves through it. That gives us a baseline to understand what happens to the material as it gets more complex and the crystal structure changes."

To make the crystals, Burgett and his team crush nuclear fuel pellets donated by INL and then heat them in a furnace at the RISE building.  Once the crystals grow, they are removed, inspected, and then polished.

The multiday process results in a crystal with atoms precisely aligned. The crystal can be studied to understand how heat moves through it.

"The goal is to build a safer fuel for a safer reactor," Burgett said.

INL researchers are excited about Burgett's work and are planning to acquire uranium and uranium oxide crystals.

INL and other scientists will subject the crystals to a variety of tests to better understand how the material behaves, said INL's Rory Kennedy, technical lead for metallic fuel technology development in DOE's Fuel Cycle Research and Development program. Such understanding is a key part of producing better fuel.

"The more you understand a material, the better you can design a material," Kennedy said. "These single crystals will allow us to study and understand uranium and uranium oxide in its simplest form."

Note: This story originally appeared on the Idaho National Laboratory's website on June 19 and was produced by the INL. The URL for the story at the INL is https://inlportal.inl.gov/portal/server.pt/community/newsroom/257/feature_story_details/1269?featurestory=DA_609335.