‘Sustaining Lewis and Clark, How Camas Kept the Expedition from Starving’ is topic of Idaho Museum of Natural History presentation May 30

May 22, 2013
ISU Marketing and Communications

"Sustaining Lewis and Clark, How Camas Kept the Expedition from Starving" is the topic of an Idaho Museum of Natural History presentation by Mary Dundas at 7 p.m. May 30.

The presentation will be held in the Idaho State University College of Education Auditorium, Building 62 on the ISU campus, 1502 E. Terry, Pocatello. There is free parking available across the street from the college. 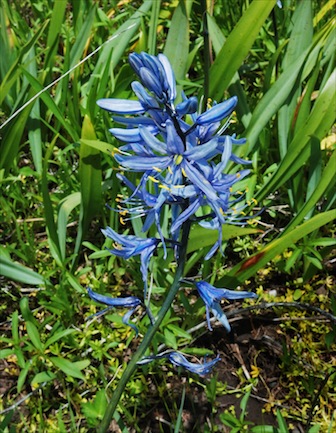 Her presentation is based on the article Dundas published in Idaho Yesterdays magazine, Vol. 48, No. 1, Spring/Summer 2007. Dundas is a retired professor and director of the ISU dietetics programs.

Lewis and Clark's Corps of Discovery expedition was one of this country's most well-documented and studied expeditions. From her article Dundas writes: "Theirs was a remarkable journey, because of the extensive terrain they traversed, the extreme physical energy they expended, the rapid and violent changes of weather they encountered, and the unique interactions they experienced with both animal and human residents."

Participants can learn about the dramatic dietary changes the 44 men, including Meriwether Lewis and William Clark, endured from the abundance of food in Montana including wild game meats to the scarcity of food during their trek across the snow-covered Bitterroot Mountains in northern Idaho.

Dundas will detail the differences between poisonous death camas and blue camas, which provides a nutritious form of energy. She will explain the term refeeding syndrome caused by long-term malnutrition and its physical effects on the body. Dundas will also explain how tribal women prepared the camas bulbs for eating.

Common camas (Camassia quamash) is one of the most culturally significant food plants in the Pacific Northwest. Historically, the camas bulb was an extremely important food and trading material to the western North American indigenous peoples. The camas prairies provided an important life way for Idaho’s native peoples. Recognized as a shared resource, camas prairies throughout Idaho became meeting places for the Shoshone-Bannock, Nez Perce, and Kootenai tribes, who gathered during their annual spring migrations, to interact together in games, dances, and storytelling.

The Idaho Humanities Council has provided funding for this event.