"My language was my weapon."

POCATELLO – When the United States issued the call to arms in World Wars I and II, American Indians answered as warriors. Some men discovered that words—in their Native languages—would be their most valued weapons. These unsung American heroes share their stories of strength and courage in a Smithsonian traveling exhibition, which opens July 20 and runs through Sept. 29 at the Idaho State University Idaho Museum of Natural History. 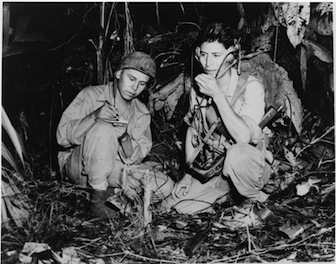 "Native Words, Native Warriors," developed by the Smithsonian's National Museum of the American Indian and the Smithsonian Institution Traveling Exhibition Service (SITES), tells the remarkable story of soldiers from more than a dozen tribes who used their Native languages while in service in the U.S. military. This inspiring exhibition is made possible thanks to the generous support of donor Elizabeth Hunter Solomon. Additional support has been provided by the Smithsonian Women's Committee and the AMB Foundation.

The involvement of the code talkers expanded during World War II. Soldiers from the Comanche, Meskwaki, Sioux, Crow, Hopi and Cree nations, among others, took part in the effort. The best known of these projects is the formerly classified Navajo Code Talker Program, established by the U.S. Marine Corps in September 1942. The encoded messages proved to be a fast, accurate and indecipherable-to-the-enemy alternative, which suited the demands of the battlefield better than the painfully slow military devices that had been standard.

Twenty-three years after the end of World War II, the U.S. government declassified the Navajo and Comanche code talker programs and revealed America's unsung heroes. In 1999 the U.S. Army presented the last surviving Comanche code talker with a the Knowlton award for outstanding intelligence work, and in 2001 President George W. Bush presented the Congressional Gold Medal to four of the five living veterans of the original 29 Navajo code talkers.

Through oral histories taken from the veterans themselves, "Native Words" celebrates and honors this important but little-reported aspect of American history. In addition to 15 large-scale banners, the exhibition includes videos examining the development of the code, battlefield experiences and the sharp turnaround many of them experienced as they transitioned from Indian boarding schools where they were punished for speaking their Native language to using it as their call to duty for their country.

The Smithsonian's National Museum of the American Indian is an institution of living cultures dedicated to advancing knowledge and understanding of the life, languages, literature, history and arts of the Native peoples of the Western Hemisphere.

SITES has been sharing the wealth of Smithsonian collections and research programs with millions of people outside Washington, D.C. for more than 50 years. SITES connects Americans to their shared cultural heritage through a wide range of exhibitions about art, science and history, which are shown wherever people live, work and play. Exhibition descriptions and tour schedules are available at www.sites.si.edu.

The Idaho Museum of Natural History is open Tuesday through Saturday 11 a.m. to 5 p.m. The exhibit runs until Sept. 29, and the museum is located on the campus of Idaho State University in Pocatello.