May 1, 2013
ISU Marketing and Communications

"It's been a perfect storm in the right way," said Melisa Moon Giannini, ISU Rodeo Club advisor. "All the pieces have come together. We have great athletes and great coaching, excellent stock and great University and community support." 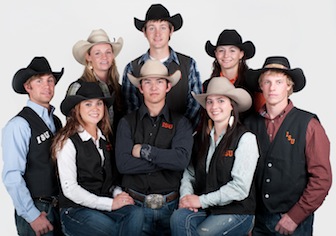 The teams finished their 10-rodeo National Intercollegiate Rodeo Association (NIRA) Rocky Mountain Region competitions in mid April and both the women's and men's teams will compete at the College National Finals Rodeo in Casper, Wyo., June 9-15. Four ISU women and five men will compete at the national rodeo.

Individually, the ISU women's team was led by Kimberlyn Fehringer, from American Falls, who is ranked first in the Rocky Mountain Region in the All-Around, Barrel Racing and Breakaway Roping.

"Kimberlyn has had an amazing year for us and we're hoping she can continue her success at nationals," Giannini said.

Shelby Freed, from Pocatello, was the top reserve in the All-Around and is third in the region in the Goat Tying event. 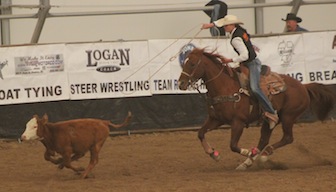 Dallen, who is also a professional team roper who used to compete with his father, Ralph, has been competing with his younger sister since they were high school, and the two younger Gunters have roped and ridden together since they were young children.

Megan is also third in the region in Break Away Roping. 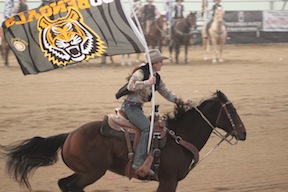 The ISU women's team heading to nationals is comprised of Fehringer, Freed, Gunter and Kiara Wanner, of Preston. On the national level, Fehringer and Freed are ranked second and fourth, respectively in the Women’s All-Around. Fehringer is also ranked first in Break Away Roping and Gunter is third as Team Roping Header.

The men's team heading to nationals is comprised of Eames, Gunter, Eldredge, Tayson Smith of Bancroft, and Gus Hill from Blackfoot. Nationally, Eames is ranked first in Tie Down Roping and fourth in the Men's All-Around, Gunter is third nationally as Team Roping Heeler. The men's team has only been fielding a five-person team at competitions when most teams are comprised of six.

In collegiate rodeo there are 11 regions nationally, but only one division. Thus club teams such as ISU compete against larger schools were rodeo may be a sanctioned sport.  The Rocky Mountain Region, which ISU competes in, is traditionally one of the powerhouse conferences featuring, among other good teams, the College of Southern Idaho in Twin Falls and Weber State University, each that have won championships.

"We have a tough region that usually does well at nationals," said Jared Arave, Bengal rodeo coach. "Because of the level of competition we face in our region, we hope to make a statement at nationals. I don't think it will get any tougher at nationals."

ISU rodeo team members and its advisor Giannini expressed their gratitude to the team’s three coaches, all from Blackfoot, who are Arave, Tony Barrington and Bobbie Jorgensen Ryan.

"A lot of success is from our coaching," Wanner said. "They're tough on us and they push us to get better. We also compete hard against each other at practice, but we have a lot of fun."