May 13, 2013
ISU Marketing and Communications

The world premiere of "Double Blind Sided," a contemporary opera inspired, in part, by Franz Kafka's "The Trial" and Modest Mussorgsky's "Pictures at an Exhibition," will be performed at 7:30 p.m. May 22-25 in the Rogers Black Box Theatre in the Stephens Performing Arts Center.

There will be an additional matinee at 2 p.m. Saturday, May 25. A post-performance panel discussion with the composer, librettist and directors will be held Wednesday and Thursday, May 22-23. 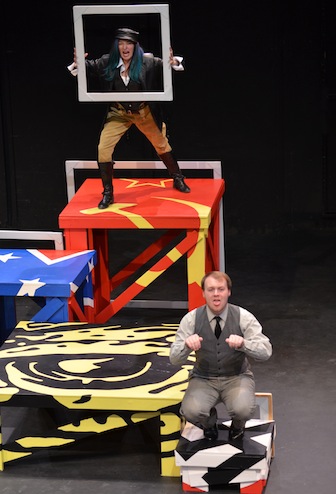 Admission is by donation.  All donations will support the tour of the work to the July 2013 Santa Cruz Fringe Festival.

The Callous Physical Theatre collaborative team of Joséphine A. Garibaldi and Paul Zmolek utilized a collaborative devising methodology with the eight performers to create movement directly linked to the text.

"The performers are singing, dancing and acting throughout the entire show.  It is really jam-packed.  I am so impressed with them," said Garibaldi.

"Double Blind Sided" was made possible, in part, by the generous support of National Endowment for the Arts, Idaho Commission on the Arts, Pocatello Arts Council, Callous Physical Theatre and the Cultural Events Committee, ISU Department of Theatre and Dance, and the Humanities and Social Science Research Committee of Idaho State University.