Idaho State University's Richard Brey, chair of the ISU Department of Nuclear Engineering and Health Physics, has this month been elected to the National Council of Radiation Protection and Measurements.

This council has a great deal of responsibility for establishing U.S. standards of best practice in radiation. 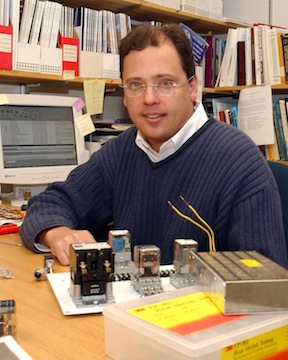 "I am honored to have been nominated and now elected to this organization, one of the most prestigious of its type in the United States," Brey said. "This also speaks well of the quality of the health physics program at Idaho State University, which is well regarded both nationally and internationally as a leader in the discipline."

Besides being the chair of his department, Brey has been the ISU health physics program director for many years.

The National Council on Radiation Protection and Measurements (NCRP) seeks to formulate and widely disseminate information, guidance and recommendations on radiation protection and measurements, which represent the consensus of leading scientific thinking.

The Council is on the alert for areas in which the development and publication of NCRP materials can make an important contribution to the public interest. The Council’s mission also encompasses the responsibility to facilitate and stimulate cooperation among organizations concerned with the scientific and related aspects of radiation protection and measurements.

NCRP has been active in the areas of radiation protection and measurements since its inception as "The Advisory Committee on X-Ray and Radium Protection" in 1929. It was originally established to represent all of the national radiological organizations in the United States on a collective, scientific basis.

The NCRP is made up of the Council members, Distinguished Emeritus members, consociate members, and adjunct members. There are 100 council members selected on the basis of their scientific expertise to six-year terms, with the terms of approximately 14 members expiring each year.

The NCRP was chartered by the U.S. Congress in 1964 as the National Council on Radiation Protection and Measurements. For more information on the council, visit www.ncrponline.org/Index.html.