Idaho State University speech-language pathologist Heather L. Ramsdell and colleagues from several universities have published an article that offers clues to the first steps in the evolution of human language.

The article, titled "Functional Flexibility of Infant Vocalization and the Emergence of Language," is available April 1 in the online edition of Proceedings of the National Academy of Sciences, one of the most prestigious scientific journals in the world. 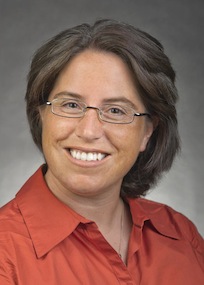 Researchers have collected data that shows human infants, by three months of age, make sounds that may reveal deep roots of human language, hinting at a very distant break from our primate relatives, according to lead author D. Kimbrough Oller, Ph.D., a professor in the University of Memphis School of Communication Sciences and Disorders.

"By evaluating these very early characteristics of infant vocalizations and their expressions of emotion, we may be able to discern markers of anomalies in development, such as autism," he said.

Ramsdell, Ph.D., an assistant professor in ISU's Department of Communication Sciences and Disorders, was instrumental in gathering and analyzing infant vocalizations for the study while completing her doctorate at U of M in 2009.

She notes that humans have the ability to produce "flexible" vocalizations. "We can produce them to mean what we want them to mean, with any possible emotional expression, for example happy or sad," she said.

The article claims that the first vocal changes that occurred as humans evolved away from their primate background on the way to language did not involve producing sentences or words, but instead involved primitive sounds expressing flexible functions and intentions.

"By three months of age, the human infant can already attach various states of emotion (as seen through facial expressions) to squealing, growling, and cooing, with each of these sound types connected to different emotions on different occasions," he continued.

The article demonstrates the vast difference in the first months of life between infants' crying and laughter, which have fixed emotional functions similar to those often seen in nonhuman primates, as opposed to the human infant sounds that can be used with flexible functions (squealing, growling and cooing) that appear to be absent in nonhumans.

The authors point out that language could not exist without the sort of freedom of vocal expression found in the very young human infant, because all aspects of language are dependent upon flexibility of the usage of vocalizations.

The authors argue that as the evolution of language began, it was necessary for it to start with primitive beginnings, similar to primitive baby talk.

Other researchers are from the Milwaukee School of Engineering, Georgia State University and University of California, Merced.