Three scholars will take up violence, censorship, terrorism and secrecy in the detective/spy genre of literature and film at 6 p.m. March 21 in the Portneuf Valley Brewery in Pocatello. 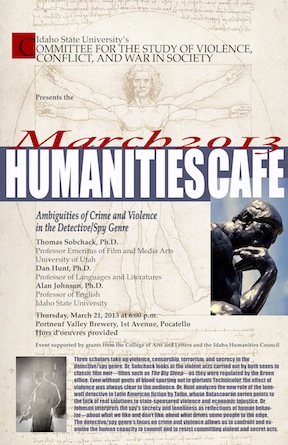 The "Ambiguities of Crime and Violence in the Detective/Spy Genre" Idaho State University Humanities Cafe is made up of panelists Thomas Sobchack, professor emeritus of film and media arts, University of Utah; Dan Hunt, professor of languages and literatures, ISU; and Alan Johnson, professor of English, ISU.

Sobchack will look at the violent acts carried out by both sexes in classic film noir—films such as "The Big Sleep"—as they were regulated by the Breen office. Even without gouts of blood spurting out in glorious Technicolor, the effect of violence was always clear to the audience.

Hunt will analyze the new role of the lone-wolf detective in Latin American fiction by Taibo, whose Belascoaran series points to the lack of real solutions to state-sponsored violence and economic injustice.

Johnson will interpret the spy's secrecy and loneliness as reflections of human behavior—about what we like and don't like, about what drives some people to the edge.

The spy/detective genre's focus on crime and violence allows us to confront and examine the human capacity to commit and to resist committing violent and secret acts.

Hors d'oeuvres will be provided at this free event that is presented by the ISU Committee for the Study of Violence, Conflict and War in Society and is supported by grants from the College of Arts and Letters and the Idaho Humanities Council.