As the Idaho State University James M. & Sharon E. Rupp Debate Society prepares to host the Cross Examination Debate Association (CEDA) National Tournament in March, one of its teams has been honing its skills, finishing in fifth place at a national tournament.

The ISU debate team of Roger Copenhaver, of Seattle, and Matea Ivanovic of Boise, finished fifth at a national debate tournament in January at the California State University at Fullerton that hosted nearly 100 of the most elite teams from throughout the United States. 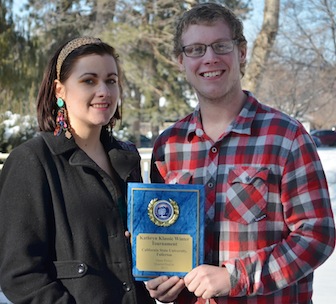 At the Fullerton tournament, Copenhaver and Ivanovic had their most impressive wins of the season. In the preliminary debates the senior team upset the eight-ranked team in nation from Emory University. Their success would continue as they advanced into single elimination debates with a 4-2 record.

"We had the most successful tournament of my career," Ivanovic said.

Her partner, Copenhaver, expressed his excitement regarding their efforts.

"I couldn't believe the wins that we had over these top-10 teams," Copenhaver said. "We got the momentum and we rolled with it."

ISU assistant debate coaches Lindsay VanLuvanee and Jim Schultz were a large part of the success of the team as they also put long hours and dedication into the research and preparation process, according to Sarah Partlow Lefevre, ISU director of forensics.

The ISU debate team also competed at a national tournament at the University of Southern California that also hosted nearly 100 elite teams from throughout the United States. The duo finished that tournament with a 4-2 record and were the 34th seed. They just missed making it to the top 32 slots and single elimination debates.

The team will travel to invitational tournaments at Northwestern University, Whitman College and Weber State University before participating in the Cross Examination Debate Association (CEDA) National Tournament and the National Debate Tournament (NDT) at the end of March.

The Rupp Debate Society will host the CEDA Nationals on the Pocatello campus from March 22-26.  This tournament will bring in approximately 200 debate teams from throughout the United States to the Pocatello for five days.