Idaho State University has announced that Laura Woodworth-Ney is its new provost and vice president for academic affairs. 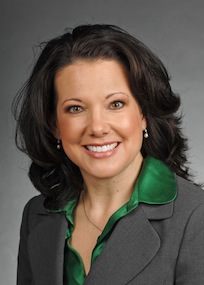 "In addition to being a scholar of history and the humanities, Dr. Woodworth-Ney has excellent credentials as an administrator," said ISU President Arthur C. Vailas. "Her experience working as an administrator at a broader level throughout the state and region in the areas of curricular effectiveness, program development and sustainability, and academic partnerships will be especially valuable as ISU continues to grow and meet the needs of its students and the state."

Woodworth-Ney said she is honored to be selected as the new provost.

"I am humbled and honored to accept this responsibility at one of the nation’s premier state institutions," Woodworth-Ney said. "I am thrilled to be part of a leadership team committed to student success and to the continuation of ISU's historic role as an academic center of research, innovation, and intellectual vitality."

As associate vice president for academic affairs, Woodworth-Ney's areas of responsibility have included curriculum management and academic program development, including fully online programs. She has been the ISU liaison for the Idaho State Board of Education in a wide variety of areas, from program development to remedial education. She has had oversight of the ISU Office of the Registrar, Early College Program and the ISU-Twin Falls Outreach Center. Woodworth-Ney has also provided support for the provost in a variety of other areas, from faculty workload issues to dean searches and hires.

Woodworth-Ney has been an active participant in the national dialogue about higher education.  She serves on the Executive Committee of the Western Academic Leadership Forum of the Western Interstate Commission for Higher Education (WICHE), and has recently been invited to speak at a WICHE conference and at the Indo-American Education Summit in Hyderabad, India.

She has been active with the Office of Academic Affairs efforts to be regionally accredited by the Northwest Commission on Colleges and Universities. She is on ISU’s accreditation steering committee and is co-chair of one of the accreditation sub-committees.

On the state level, Woodworth-Ney is the ISU member on the State Board of Education’s Transform Remediation and General Education Reform task forces, working closely with the state's chief academic officer. For the past two years she has also provided support for ISU’s presentations to the Joint Finance and Appropriations Committee of the Idaho State Legislature, the House Education Committee and the Senate Education Committee.

Woodworth-Ney's former administrative appointments at ISU include chair of the department of history and co-director of women studies. She also served on the ISU Faculty Senate, both as a senator and as an elected member of the Faculty Senate Executive Committee. Woodworth-Ney, who has been at ISU since 1999, has authored more than 30 articles, book reviews, and scholarly essays, as well as three books (several co-authored).

"I look forward to working with the faculty to take advantage of ISU's unique academic and programmatic opportunities," Woodworth-Ney said.

Woodworth-Ney is a graduate of the Bryn Mawr HERS Institute for higher education leaders, and a member of the Board of Directors for the Redd Center for Western Studies at Brigham Young University, Provo. An award-winning editor, she is the former editor-in-chief of Idaho Yesterdays, the state historical society's scholarly journal; a founding co-editor of Idaho Landscapes, the Idaho State Historical Society's magazine of Idaho history, politics, and culture; the founding editor of the Women's Western Voices book series at the University of Arizona Press; and is a member of the editorial board for the Pacific Northwest Quarterly.

Woodworth-Ney says she is passionate about the potential of higher education to change lives, and is an active public speaker on the topics of culture, history and education. She is currently writing a history of the culture of the irrigation movement in the arid North American West, including Canada and the United States.

Woodworth-Ney earned a bachelor degree in English from the University of Idaho, and a PhD in American history and public history from Washington State University.

Woodworth-Ney, a native of Rupert, is a fourth-generation Idahoan, and lives in Pocatello with her husband, John Ney, and son. John is the ISU College of Business director for professional development.

"Dr. Woodworth-Ney has served ISU admirably as a teacher, researcher and administrator," Vailas said. "She embodies the strengths of Idaho State University, and we are pleased she is joining our senior administrative team as provost to further the depth and quality of our academic affairs."