Science and science education will be on display this week at the Idaho Science and Engineering Festival, which is part of the Celebrate Idaho State event in the Pond Student Union March 19 from 4 to 7 p.m.

The Science and Engineering Festival will feature interactive exhibits and games from science departments. Some examples of activities include building a catapult, designing an device to catch an egg falling from various distances, building a paper rocket, and much more. 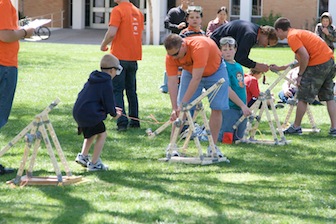 There are more than 120 groups at Celebrate Idaho State that will provide a variety of free food, entertainment, art, culture and information at the Pond Student Union. Of this total, more than 25 scientific displays and demonstrations will be in place, offering a wide assortment of activities, hands-on informational booths for families and children. Idaho Science and Engineering Festival booth topics include topics for the "Microbiology of Your Hands" and "Learning about Stream Insects," to "Isolate DNA from Bacteria!"  and "Build a DNA Double-Helix."

Children of all ages and their families are invited to participate. Besides interactive booths and displays, science-themed songs, dances and art, the Idaho Science and Engineering Festival is holding egg-drop and egg-toss competitions. Both competitions involve participants building a device, either an egg catching device or an egg catapult, then testing their design to see if it works. In both competitions, the individual or group with the most successful design will be awarded a prize.

Festival goers can view the contests, sponsored by the festival and the ISU Department of Physics, at the following times and places:

• The egg-toss catapult competition will be held from 5:30 to 6:30 p.m. on the Hutchinson Quadrangle.

The Idaho Science and Engineering Festival is offering two contests for high school students. The first contest is to design an interactive science activity that explains the science behind imaging, which features a $500 first-place prize.  Entries in this contest will display their booth at the festival. The second contest is to create a science video to explain a scientific concept or theory.  This contest features a $250 first-place, $100 second-place and $50 third-place prizes. The winning videos will be on display at the festival.

"We're trying to stimulate interest in and appreciation for science, and hopefully attract some of the participants to consider the sciences as a possible career," said Jean Pfau, ISU associate professor of biology, and an Idaho Science and Engineering Festival co-director.

For more information on the ISU Science and Engineering Festival, visit www.isu.edu/isef, or for more on the national festival visit www.usasciencefestival.org.