A special free screening and panel discussion of the new documentary film "Grow!" will be held from 7 to 9:30 p.m. Feb. 21 in the Idaho State University Pond Student Union Salmon River Room.

This award-winning film chronicles the experiences of 20 young farmers in the state of Georgia who explain what inspires them to work the land. The film raises awareness of sustainable agriculture and the level of environmental activism among the Millennial Generation. 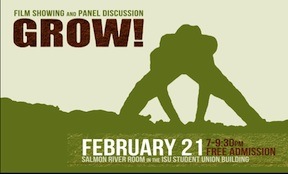 This event is co-sponsored by ISU's Department of English and Philosophy, the English Graduate Student Association and the Portneuf Valley Audubon Society.

More information on the film is available at http://growmovie.net/.