The easy part was finding artifacts; the hard part was digging so deep.

"Exciting things happened right away," said David Peterson, Idaho State University assistant professor of anthropology, research scientist and director of the 2013 ISU Archaeology Field School. "Within 10 minutes at the first site we examined, we found three arrowheads that we could identify by their type, the first identifiable points ever found at the site."

The group's adopted, semi-tongue-in-cheek slogan provided by Peterson was "at the trowel's edge of discovery." But Peterson, a veteran of numerous archaeological digs and other research in North America and as far away as Kazakhstan in Central Asia, was not prepared for how many artifacts his archaeologists in training would find on the edge of their trowels.

"I've never been on a testing project where we've dug this deep before," Peterson said. "Generally you dig down to a level that shows no previous occupation, maybe 3 feet or so, and it ends there. It seemed like the deeper we went, the more we found so we kept on going. Usually in archaeological testing you're lucky if you find something 10 percent of the time, but we've found things throughout the field school."

For four weeks this summer the field school's 10 ISU undergraduate and two master's-level students kept finding artifacts while they dug deeper, meticulously sifting and searching through piles of dirt in the Sawtooth National Forest southwest of Rockland in the Sublett Mountains, about an hour and 15 minute drive from Pocatello.

The students found the first three arrowhead points while doing a preliminary survey of the three sites they were directed to by Sawtooth National Forest archaeologist Brett Guisto. Those obsidian arrowheads were identified as Rose Spring points, which can be as old as 300 A.D. Others they found are probably much older.

The discoveries kept coming, some almost jumping out at the students.

"One day I was giving a demonstration on how to dig efficiently with a trowel," Peterson said. "I was saying 'here's how you do it' and while I was demonstrating, an Elko (a projectile point made of chalcedony of a type that can be hundreds, even thousands of years old) popped up like a coin being flipped from the edge of the trowel."

Other finds included varieties of obsidian and stone projectile points of types ranging from 400 to 6,000 years old, a knife or dart point made from petrified wood, obsidian and 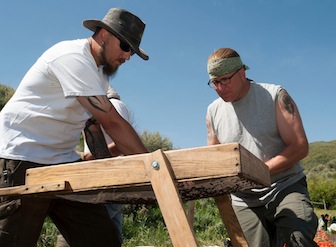 stone tools such as knives and scrapers, and ancient debris such as animal bones, some of which showed marks from being worked on with stone tools. Curiously, no ancient ceramics were encountered, which may mean that the site was host to many temporary camps over hundreds or even thousands of years, rather than permanent villages. More recent items included barbed wire, rivets and glazed ceramics. The crew also collected charcoal and bone samples that will be used to date the artifacts by using accelerator mass spectrometry, a method of radiocarbon dating.

"It's like fishing," said student Matt Shugert. "Sometimes you catch some and sometimes you don't. But overall we did pretty well." 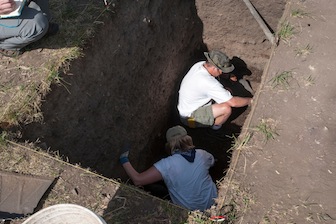 The site, named Sublett Troughs, was the lowest of three sites that Guisto showed the ISU group. Peterson had planned to work at Sublett Troughs for a week or two, then to move up the mountain to the two other sites the group initially surveyed. The Sublett Troughs site was so rich, however, that the group never left, carefully digging two legally-defined 1-meter (3.2-feet-)wide by 2-meter-(6.4-feet)long "test pits" in 10-centimeter levels. Test pit No. 1 reached a depth of more than 6 feet; No. 2 was nearly 5 feet deep.

The site is located near a spring at an intermediate elevation and was obviously well used by ancient Native Americans. The site is also located along the California Trail, which thousands of emigrants to the West traveled on in the 1800s. The Sublett Troughs site that the ISU students and professor surveyed has the potential of being officially designated as a protected site on the National Register of Historic Places.

Peterson said teaching site protection and conservation is a key element of the class.

"One of my objectives is to get the students trained and familiar with methods of Cultural Resource Management that are practiced by government agencies, such as the U.S. Forest Service and Bureau of Land Management, and private companies, that can help them get jobs in the future," Peterson said. "We emphasized conservation and preservation of the site, and the artifacts we collected, rather than full-blown excavation that is most often part of research rather than site protection."

Students were taught how to do initial surveys of sites by walking them and completing transects, to map using GPS equipment, to perform subsurface testing, and how to excavate, as well as proper methods of field collection and labeling of artifacts and radiocarbon samples.

"The best part of the class was just getting the hands-on experience," Shugert said. "It's one thing reading about it, it's another thing doing it. The overall experience was great. The high point for me was finding a point at a depth of about 160 centimeters (a little over 5 feet)."

The field school's archaeological sites invite further study. "Potentially, there could be years and years of research at these spring sites," Peterson said.