Ron Nilson, CEO and president of Ground Force Manufacturing in Post Falls, is the Idaho Business Leader of the Year 2013.

The professional business fraternity at Idaho State University, the Delta Upsilon Chapter of Alpha Kappa Psi, will recognize Nilson at a dinner in Pocatello on Thursday, March 21. 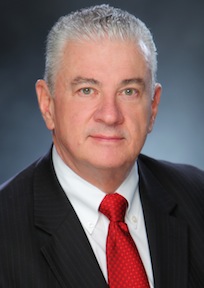 The award annually recognizes an Idaho business leader who has demonstrated outstanding business and professional ethics while contributing significant support to worthwhile community, civic and education activities. Awarded by ISU College of Business students since 1959, previous honorees have included a congressman, former governors, entrepreneurs and leaders of some of Idaho's largest companies. The recognition program is the longest-standing such program in Idaho.

At the end of 2000 Nilson bought Aresco, a small, struggling manufacturing company in Post Falls and saved 20 jobs. His goal was to expand the mine support equipment product line and to take the products to a global market. Today Ground Force Manufacturing is one of North Idaho’s best success stories. However, the path to success was not smooth. Ground Force was almost forced into bankruptcy in 2001.

Nilson's hard work, integrity and dedication to uniting a service driven "Dream Team" has allowed Ground Force to grow to four factories and 225-plus employees around the world. Ground Force currently does business in more than 45 countries and sales have soared in the last three years.

Under Nilson's leadership, the North Idaho heavy equipment company has undergone a major expansion with a new state-of-the-art, 85,000-square-foot factory that tripled its production capacities. Through his dedication and investment in Idaho, Nilson has increased Ground Force’s factory square footage from 55,000 to 240,000 and grown its skilled labor workforce by more than 300 percent in the last three years.

Nilson's commitment to Idaho and his local community is further demonstrated through his decision to retain his Idaho-based engineering department and sales force that travels worldwide.  Ground Force's factory in England, acquired in 2011, continues to thrive. A Peru location is slated for 2013, creating a sales-support and field-service base for Latin American customers.

Nilson serves diligently in his community. The Kootenai Technical Education Campus was born under his leadership. He has also donated the use of a 4,000-square-foot warehouse to the community to be used as a warming center for the homeless.

Nilson's integrity and ethical community and business practices have benefited his workforce as well. His company culture facilitates employee retention. Nilson is willing to work with his employees in any fashion to make sure they are healthy and happy in their work environment. Because of his devout commitment to the community and his employees, he was named the Post Falls Citizen of the Year in 2008.  Additionally, the Post Falls Chamber of Commerce named Ground Force Manufacturing "Large Company of the Year" for 2009.

"The students in our community are our future leaders," Nilson said, about his role as a businessman. "The education they receive and how they are taught to manage their skills moving forward is key to their success."

His public service in elected or appointed offices includes:

Community service positions he has held include:

• Boys and Girls Club – Board Member;

• Post Falls Chamber of Commerce – Chairman of the Board;

• Concerned Businesses of North Idaho; and

Individual tickets to the March 21 banquet as well as event sponsorships are available. For more information, contact Josh Bullers or Shawn Kelsch, Alpha Kappa Psi Idaho Business Leader of the Year chair, at 208-539-2194, 208-339-3103, or by email at ibloy.akpsi@gmail.com.