The aircraft was received by the Idaho State University College of Technology Aircraft Maintenance Technology program almost a decade ago from Wallace in a crate. 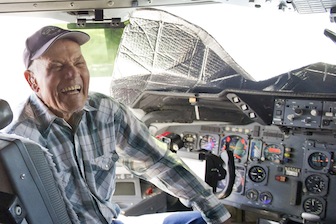 Since then, Aircraft Maintenance Technology and the College of Technology Automotive Technology program rebuilt and repainted the aircraft. The finished project was dedicated to the late John L. Bakken, instructor emeritus at ISU.

Wallace had used the aircraft on his ranch, but had not flown in it in almost 20 years.

"They've done such a great job on this, I’ve got to fly it," said Wallace. "When you are up there, that’s where you are free."

Wallace served in WWII from 1942 to 1946 and piloted a Vought F4U Corsair carrying rockets and ammunition. After the war, he lived in California and was in the crop dusting business. Twenty-seven years later, he moved to a ranch outside of Lava Hot Springs and has resided there since. He described memories of air combat with fellow pilots and the excitement of flying.

After his first flight, Wallace beamed with gratitude as others were offered a ride in the tiny aircraft.

"I am not sure what to do with it now," said Wallace. "I'll fly it every now and again. They did such a great job on it. Anyone who'll work on an airplane, well I like them."