A study about the effects of "loudmouths" in groups, conducted by researchers from Idaho State University and the University of Utah, was recently discussed in an article by the Wall Street Journal. Alex Bolinger, assistant professor in the Department of Management, worked with his former dissertation adviser from the University of Utah, Bryan Bonner, on the study titled "Separating the Confident from the Correct." 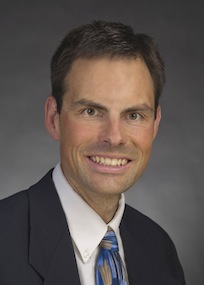 "It's pretty incredible. I was really surprised that [the Wall Street Journal] picked it up," said Bolinger. "I am really excited for ISU. I think it's a good opportunity to get exposure for the kinds of research that is being done here."

The link to the Wall Street Journal story is http://stream.wsj.com/story/latest-headlines/SS-2-63399/SS-2-339950/. The study will be published in the November 2013 issue of Organizational Behavior and Human Decision Processes. It addresses the issue of more confident or extraverted individuals who dominate group conversations, often leaving out quieter group members who may have valuable knowledge that they don't get a chance to share.

Bolinger said that he and Bonner study how members of groups and teams work together to solve problems. During their research, they saw that many groups lack an organized process, instead launching right into problem-solving instead of creating a strategy. Most groups don't take the time to establish which group members have the best knowledge or resources to solve a particular problem, leaving a wide-open space for outgoing members to take over the process.

Although many people assume that having the confidence to take over a group's discussion means that person is the most knowledgeable about the conversation topic, Bonner and Bolinger's study shows that is not actually the case.

"It might be the more introverted, quiet person who has the key information to help the group," said Bolinger. "But a lot of groups don’t leverage that person's knowledge; they never give that person any airtime."

Bolinger suggests that groups can make better use of their quieter but equally capable team members by setting aside a few minutes at the start of a group discussion to establish who knows what.

"A lot of people don't like working in groups very much. Part of the problem is that most groups just jump into the task without talking about how the discussion should be structured. So you end up having one or two people who dominate the conversation, the other members feel left out, and the result is sub-optimal," he said.

In his Organizational Behavior classes, Bolinger teaches his students about how to discuss decision-making to optimize their time working in groups.

"In my classes, we talk all the time about discussing the process before beginning the task. I think that if more groups did that, it would improve the quality of decisions and I think fewer people would be uneasy about working in groups. They would be more receptive to it," he said.