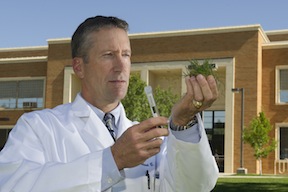 For more than 40 years, researches have attributed a greater risk of injury to playing on artificial turf when compared to natural grass. However, over the past two decades, synthetic surfaces such as FieldTurf, which consists of polyethylene fiber blended with graded silica sand and cryogenically ground rubber, have been further developed to simulate playing characteristics of natural grass.

"My main goal is to minimize athletic trauma, especially for adolescents," said Meyers. "I want parents, coaches and school administrations to be aware of playing surfaces and to use this research to make more informative decisions."

"From an environmental standpoint, using FieldTurf also has more benefits," said Meyers. "Natural grass requires a larger staff to maintain it, and tremendous amounts of water, pesticides, herbicides, and fertilizer, especially in arid places like Idaho. When you add up what you have spent maintaining natural grass over an eight-year period, it’s more expensive when compared to FieldTurf."

With any long-term study, gathering and analyzing findings on 154 variables and over 4 million bits of data, as well as tracking teams and coordinating efforts across the country over extended periods of time is a continuous, year-long challenge. Meyers has also conducted artificial turf research on football involving 51 high schools in four states over the last eight years and similar research regarding NCAA men's soccer over the last six years. The data for men’s soccer is set to be announced next year.

"Without sports medicine professionals, especially the athletic trainers, these studies would not be possible," said Meyers. "These individuals are truly dedicated in searching for the ideal surface to minimize trauma."

Meyers' research was partially funded by FieldTurf and through additional laboratory funding sources. For more information on this research visit The American Journal of Sports Medicine at bit.ly/1dN3H5n.