An afternoon presentation is scheduled at 1 p.m. in Room 104 of the Idaho State University Business Administration Building and an evening presentation will be held in the Idaho Museum of Natural History at 7 p.m. The presentations are sponsored by the ISU Informatics Research Institute (IRI) and IMNH. 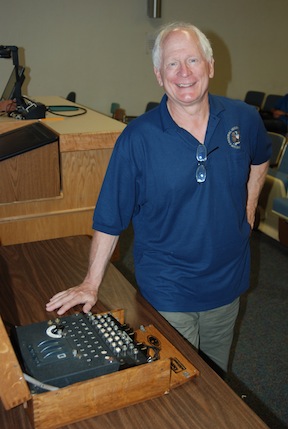 Mucklow will bring a working ENIGMA on loan from National Security Agency with him for demonstrations of how this device functions, and it will be on display for the public. He will also work with the Idaho Museum of Natural History and the Informatics Institute to create 3-D images of the ENIGMA device while he is here with the device.

When the Allies in World War II broke the code for this device it was one of the turning points of the war.

An encryption device takes plain text and converts it into unreadable text. It also has the capabilities of taking an encrypted message and translating it into a readable message. The ENIGMA was the most famous encryption device during World War II. It was the primary encryption device for the German forces.

Mucklow will describe the strengths and weaknesses of this device in layman's terms as well as its importance during World War II. He will also discuss the efforts and successes of the United States in keeping communication secret through the Vietnam War using devices like the SIGABA.

By cracking the ENIGMA code, the Allies gained knowledge of the German military's operation plans. The ENIGMA code was broken by a group of cryptographers from Britain, Poland and the United States.

As the Germans believed the ENIGMA was undecipherable, they continued to use the device throughout the war. According to event organizers experts believe that by breaking the code for the ENIGMA encryption device the Allies shortened the war about two years and saved many lives.