Wait, they're already here and are present in astounding numbers throughout the western United States posing vexing questions for researchers, land users and resource managers.

The Russians referred to here are Russian Olive trees – so prevalent in Western States that many people do not realize they are a non-native, invasive species. Over the last 50 years they have escaped from their use as an ornamental tree and in plantings aimed at control of erosion. They have become the second most abundant tree on western streamside areas, second only to another non-native, invasive tree, the Tamarisk or Saltcedar, which is more common in the southwestern states. 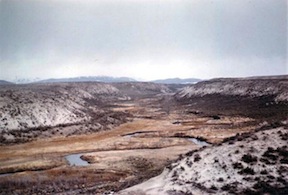 Researchers at the Idaho State University Stream Ecology Center, with support from the National Science Foundation and cooperation from the U.S. Forest Service, are investigating the ecological effects.  In the coming year, this team will also begin studying the potential benefits and risks associated with Russian olive removal, an action that is increasingly being implemented as part of as part of watershed management. 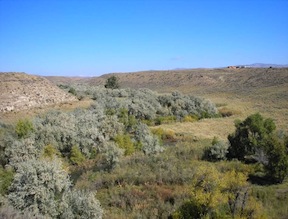 "Russian Olives spread along streams, and whereas other scientists have shown they may affect native plants and wildlife, our studies have begun to document unforeseen consequences of this terrestrial invasive species within aquatic ecosystems," said Colden Baxter, associate professor of biological sciences and director of the ISU Stream Ecology Center.

Studies led by Baxter and former ISU Ph.D. student Madeleine Mineau, now a faculty member at the University of New Hampshire, demonstrated effects Russian Olive may have on the flows of energy and nutrients in stream ecosystems.

They took advantage of Russian Olive invasion at ISU's long-term study site at Deep Creek, on the Curlew National Grassland in Southeast Idaho, where ISU researchers have worked since Baxter's predecessor Wayne Minshall began ecosystem investigations there in the early 1970s. Since then, there has been a dramatic invasion of Russian Olive at one site, whereas another has remained free of the tree, affording a unique opportunity for a multigenerational (as an emeritus professor, Minshall has been a participant as well) before-after comparison of the stream ecosystem.  Paired photos of the invaded site from the 1970s versus the present show a stark contrast, with an almost complete takeover of the streamside landscape by the invasive tree. 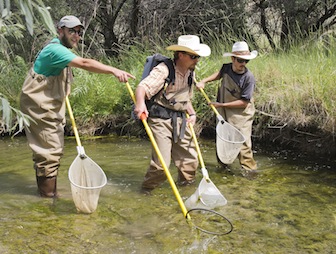 Russian Olive trees contribute large amounts of leaf litter and olives to streams.  They also fix nitrogen similar to the way legumes do, converting nitrogen from the air into forms of nitrogen that end up in soils, but also in streams. The ISU studies, published recently in the journals Ecology and Ecosystems, show that streams invaded by the tree  carry increased levels of nitrogen and they also accumulate and export the Russian Olive organic matter, probably because the leaf material is tough, laced with defensive chemicals, and may be difficult for most native stream animals to use as food. Many of the streams along which Russian Olive are spreading already face degraded water quality, and the export of more nutrients and carbon to downstream rivers and reservoirs may exacerbate such problems in those environments as well. 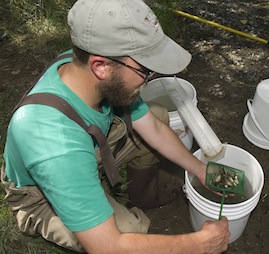 The ISU team is also exploring the possibility that the spread of Russian Olive may be facilitating increases in other nonnatives, creating wholesale ecological changes via what has been termed an "invasional meltdown." In particular, current ISU doctoral student Kaleb Heinrich is working with Baxter to determine if Russian Olive may be contributing to the corresponding spread of another non-native species, the common carp.

"We're studying how carp interact with Russian Olive," Baxter said. "Carp may be subsidized and their numbers increased by the presence of Russian Olive."

It's known, for instance, that carp, which can flourish in degraded waters where native species such as cutthroat trout cannot, will gorge themselves on the fruit of Russian Olive trees, and they, unlike most of the native fishes remaining in these streams, have large "pharyngeal" teeth that allow them to crush and derive energy from them, Baxter said.  In turn, increases in carp might further degrade water quality due to their disturbance of streambed sediment while feeding and recycling of nutrients into the water, and may add to negative pressures on native species by serving as prey for nonnative predators like bass and perch.

"Russian Olives are increasingly recognized as undesirable, and some removal efforts are already ongoing," Baxter said. "But we don't know what the consequences of these efforts might be. There may be pros but also unexpected cons associated with removal, and we need to evaluate those. Experiments on a smaller scale may help inform plans to do large-scale removals across our region."