The team includes sophomores Brock Sondrup and Jakob Meng of Idaho Falls, along with freshman Sasha Ivanovic and Michael Eyre of Boise. 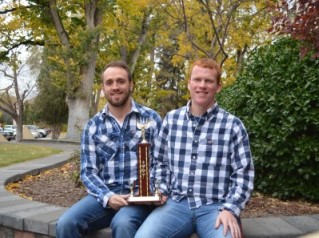 Meng was recognized as the second best speaker. Sondrup was awarded the third place speaking award. Meng and Sondrup won ballots from all 12 judges in six preliminary debates and in two single elimination debates. The tournament was held in late October.

“I am constantly inspired by the amount of work and research the debaters put in,” said assistant debate coach Roger Copenhaver. “We have a young team, but they continue to surprise me and exhibit a large amount of talent and an even stronger desire to learn. Our debaters continue to show us that they have the ability to compete against some of the best teams in the nation.”

“We are lucky to have such talented coaches and debaters,” said Director of the James M. & Sharon E. Rupp Debate Society, Sarah Partlow-Lefevre. “Assistant Coach Copenhaver has helped them to focus on individual growth through teamwork. In this way, the debaters are building strong friendships and competitive success.”

The team will finish its fall semester with two, policy-style debate tournaments at Wake Forest University in Winston-Salem, N.C. on Nov. 15-19 and Weber State University in Ogden, Utah Nov. 22-25.

For more information about the Rupp Debate Society, contact Sarah Partlow-Lefevre at partsara@isu.edu or 208-282-5962.